3 Things You Should Do for Your Adopted Dog

3 Things You Should Do for Your Adopted Dog

**This conversation about Just Right by Purina is brought to you by Purina. All opinions are my own.** #DogsofJustRight #ad 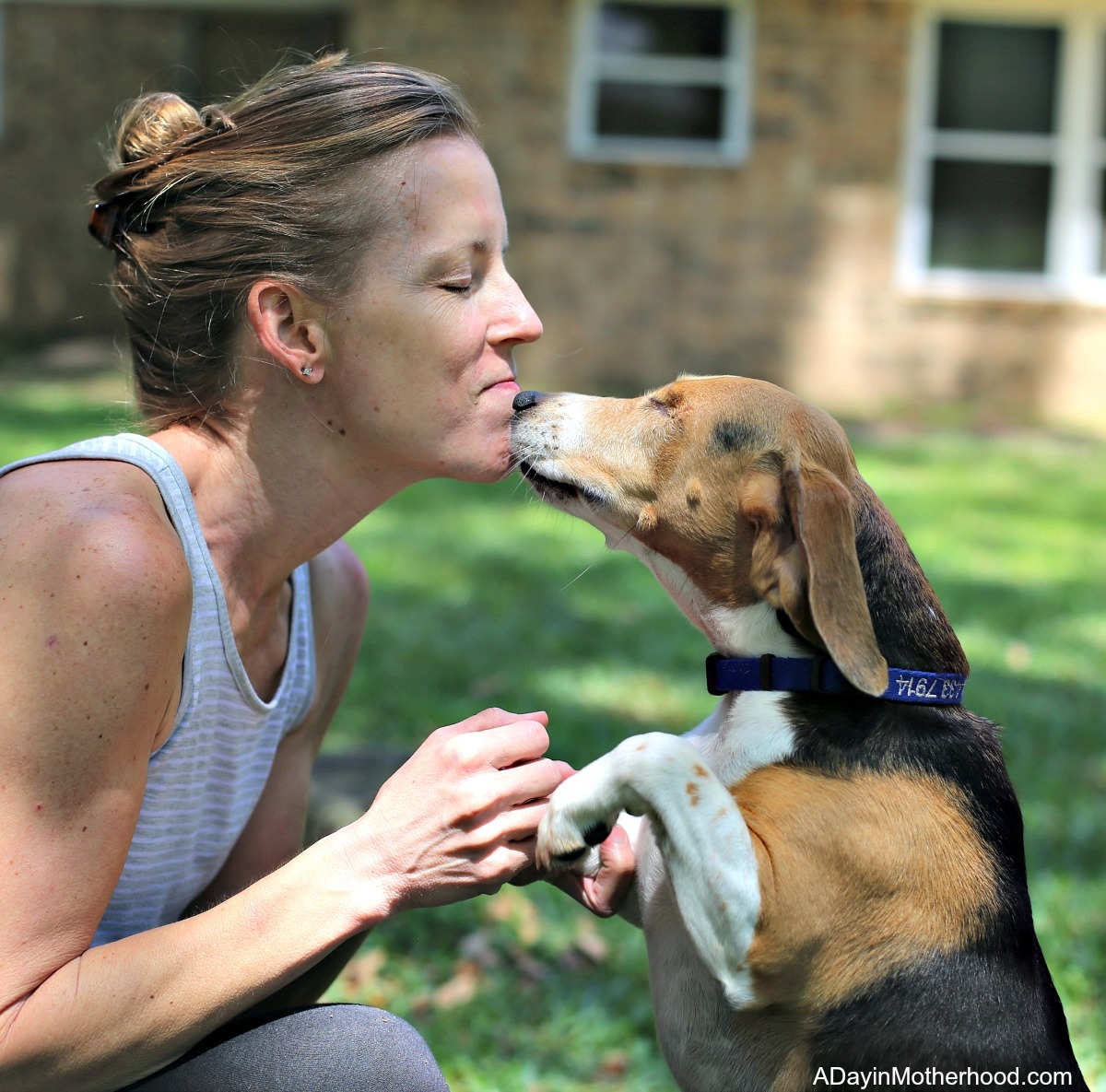 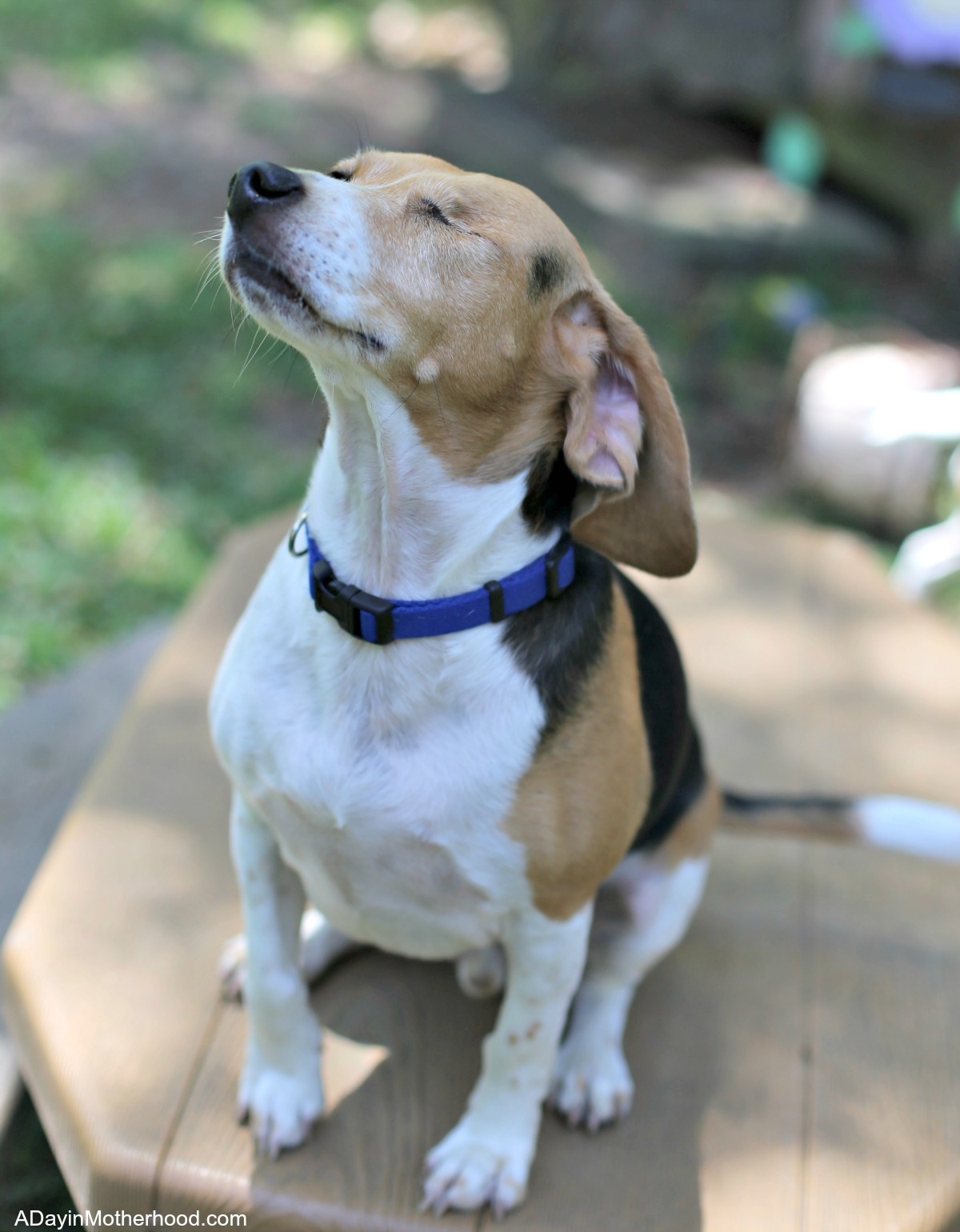 My One Eyed Jack is a very special dog. He did not have the best first year of his life. He was neglected, was let loose to run the neighborhood – where they claim he was even hit by a bus , was malnourished and really needed some love. You can see in his ‘before surgery’ photos below that he was not having the right kind of life. When I got him he was very underweight and so scared of being out of my sight. He was newly one eyed and having some adjustment to being a one eyed dog. Over the two years I have had him, however, his true personality has come through and made anyone who sees him fall head over heels. On this National Pet Day, when the internet is full of people’s pets that they love, I want to help anyone who is adopting make the transition easier for any dog that comes in. So, as a dog mom of four and foster mom of 13 – so far -I want to share 3 Things You Should Do for Your Adopted Dog now! 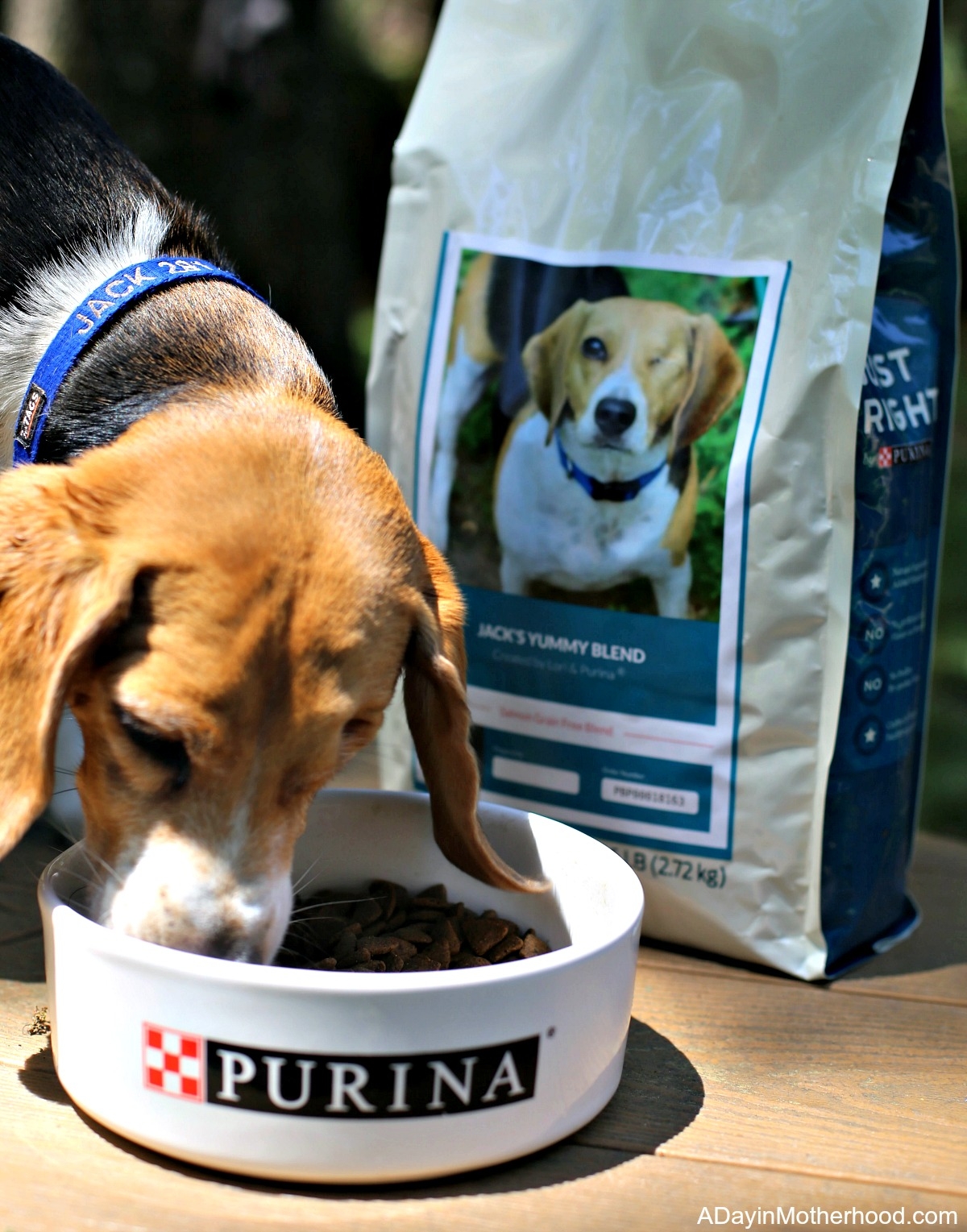 I can not stress enough the importance of good nutrition for any dog. As you can see, Jack was seriously thin when I adopted him. Scary thin. I started him on Just Right by Purina shortly after getting him.  He is on a Grain Free Salmon blend I customized for him on their website that has really helped him. He has put on weight and maintained that healthy weight, grown and thicker and softer coat and his eye shines happy every day. He has energy for days and is as healthy as a dog can be. I have been extraordinarily impressed with his progress and his continued love of the food!

Another important thing you can do for your adopted dog is to never feed them human scraps. It does more than cause them to beg when you do that, it introduces foods into their diets that may not be good for them. There are more things that are toxic to dogs than you think and feeding them human food can endanger them! 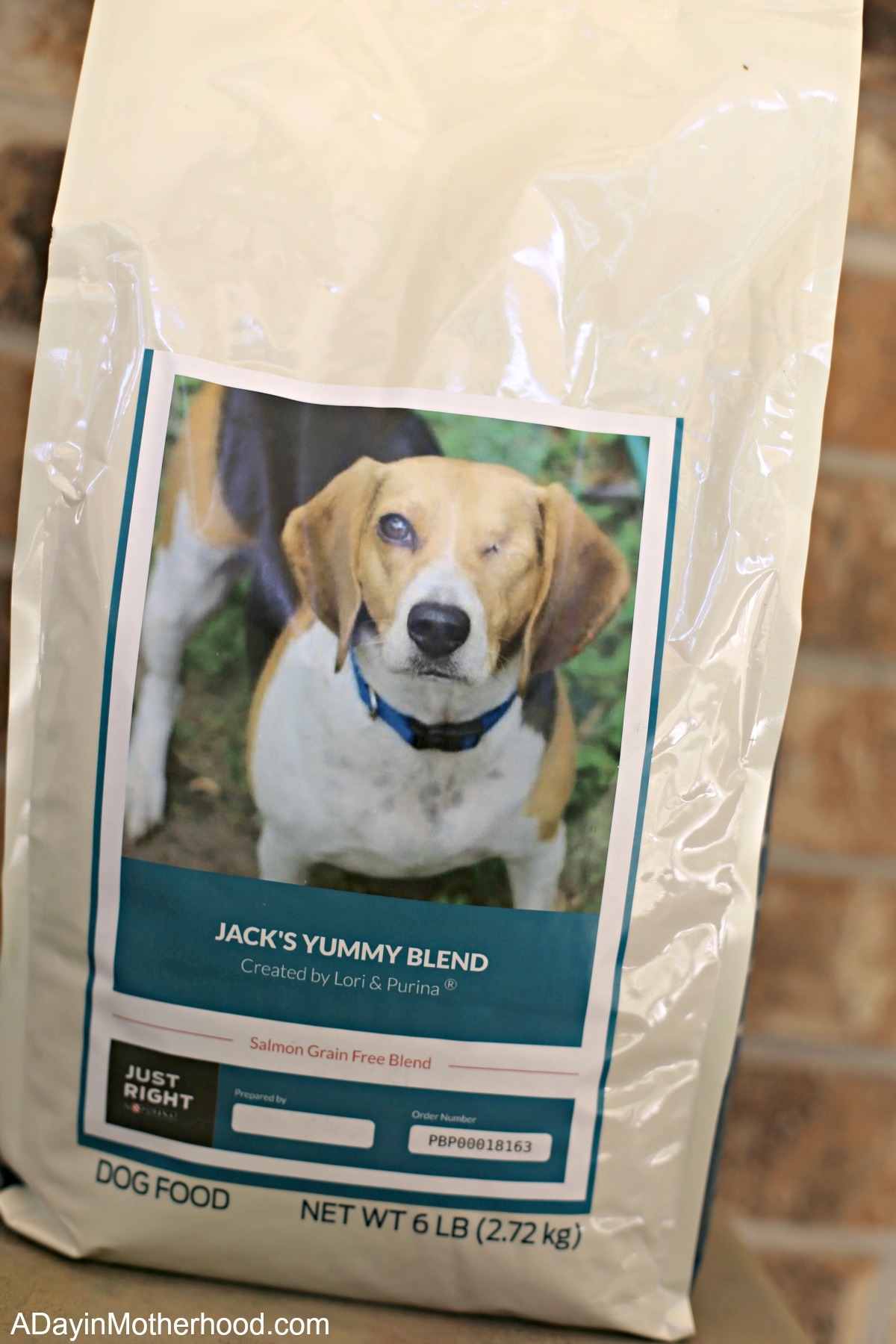 In addition, dish out the treats sparingly. Mine get one when I leave the house or when I want them to go outside for a little while. Some days they get 2 or 3, some days they get one. But I try not to go over 3 a day. Too many treats can lead to obesity and no one wants that for their precious baby.

Let Them Be Them

Jack is teenage boy with a lot of energy and a whole lot of personality. He has the cutest looks and actions that make him unique. Because he only has one eye, he likes to give me the one eyed stink eye! He turns his head and almost rolls his eyes sideways to tell me what he thinks of whatever command I have given him. 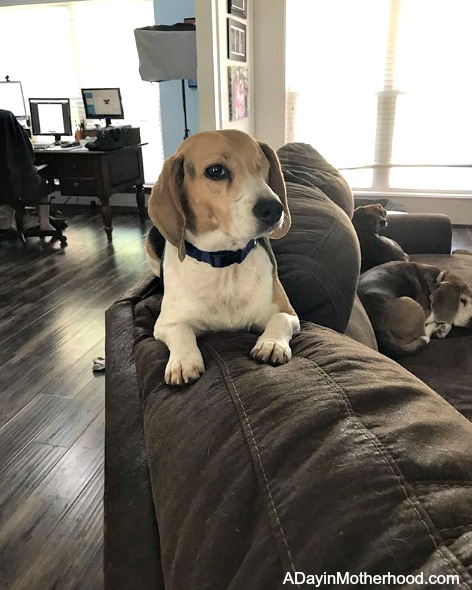 But, by letting him be the dog he is meant to be, I also get the benefits of his quirkiest behaviors. Like when he paws at me for attention or rolls on his back to sneeze! My girls LOVE this! Just check him out showing off his cute!

Most adopted dogs are not going to come ‘ready made’. They all need some sort of discipline. We don’t always know what their story was or how they came to be adoptable. Never hit a dog, of course, and I am not a big fan of kenneling for punishment either. 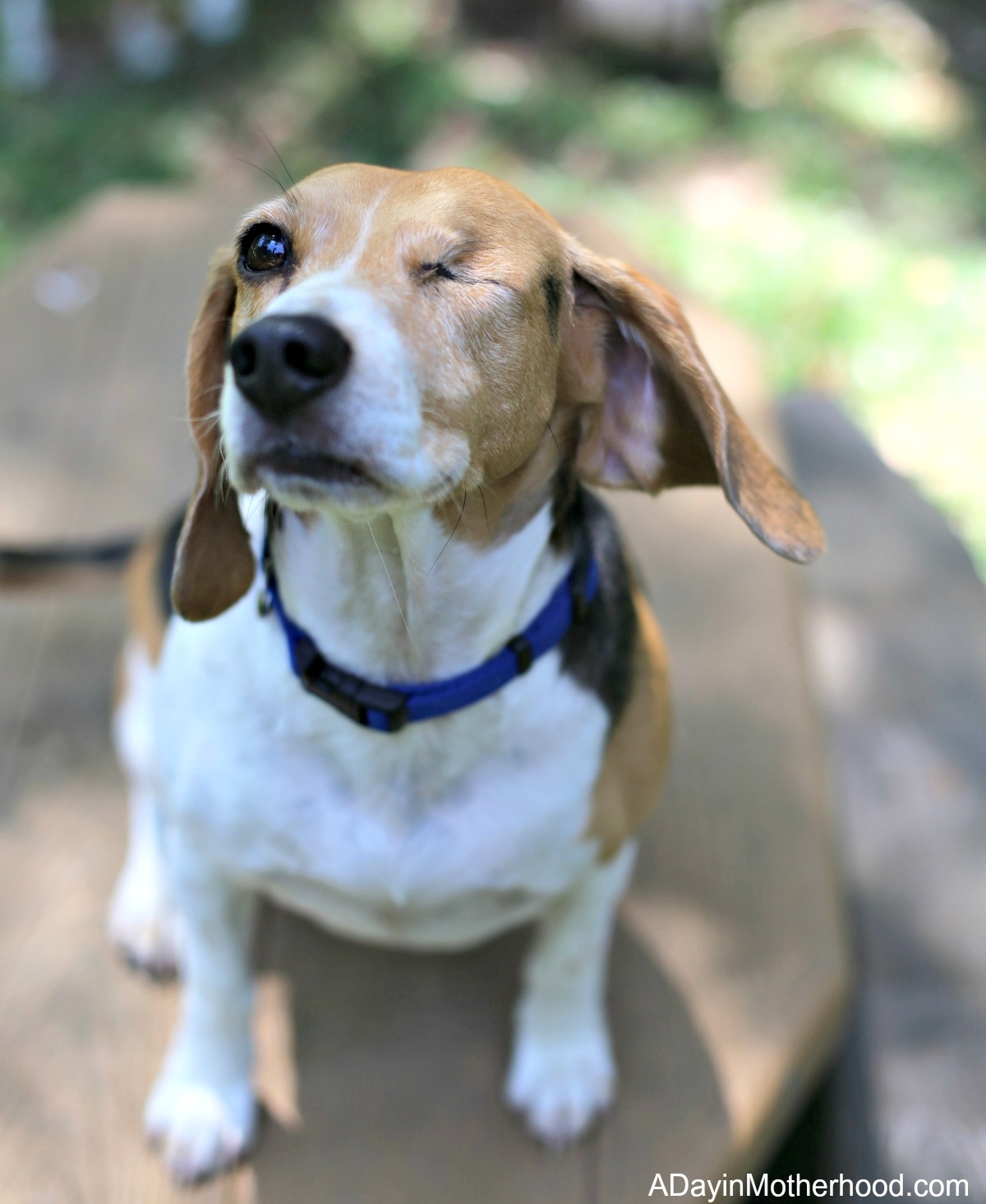 My tool of choice for begging, overly aggressive barking, playing too roughly or being where I don’t want them to be – like the counter – is a simple water bottle. I have them all over the house and, when one or more of my dogs gets out of hand, I spray them. It does not take long for them to learn the lessons of the house and they are never injured or hurt in the process. In fact, I can sit, with 6 dogs in the house, 5 of them scent loving beagles, and eat on my couch with the water bottle next to me and none of them bother me!

It’s a miracle worker! I promise!

So, on National Pet Day, when the wonderful pics cause you to start looking for that next addition to your home, remember these 3 Things You Should Do for Your Adopted Dog!