Help Jackson – a Very Speical Boy – With a Colorful Card

Help Jackson – a Very Speical Boy – With a Colorful Card 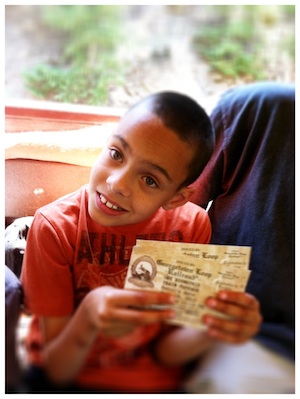 A Group of Special Needs parents, bloggers, advocates, and an artist with epilepsy have joined together to get a mail flurry going for Jackson St. Aubin, the nine year old son of Gina St. Aubin, who owns and authors the site SpecialHappens.com. In nine days Jackson, who has Autism, Cerebral Palsy, Sensory Processing Disorder, and Intractable (uncurable) Epilepsy, will undergo a Hemispherectomy – brain surgery in which the two halves of the brain are disconnected. You can read about it on their Facebook page.

The group is not asking for money, though you can donate through rally.org on his official site.   The group simply wants to spread the word far and wide, and get a mail flurry from people all over the world, so the walls of his hospital room will be covered with cards, letters, pictures, and drawings that people have sent him.

Please make the pictures, cards, drawings and letters as colorful as you can, as they will be used as part of his brain therapy as he recovers.