7 Words That Are Banned in My House

7 Words That Are Banned in My House

As a self proclaimed writer, I am a champion for the English language. I am also a supporter of using words to promote your true feelings and emotions as they happen. However, I do feel that words hurt and can hurt very deeply. Even the words you say to yourself. So I have 7 Words That Are Banned in My House for my kids. Not only for the sake of others, but for the sake of themselves! 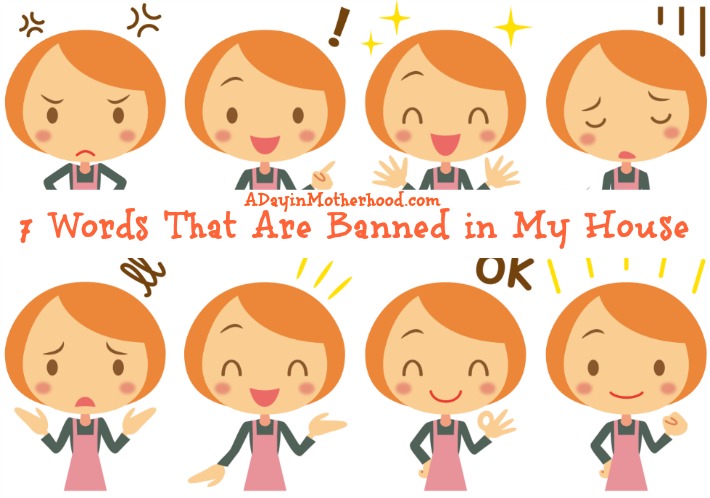 Shut Up!  I can not STAND this term. I find it to be so disrespectful and rude that it makes my skin crawl. People use speech to express themselves. Telling them to shut up essentially tells them that their speech means nothing to them, and thus they don’t either. I don’t tell my children to shut up and I don’t allow them to say it either. I use ‘hush’ or ‘please be quiet while I talk’. I am teaching my kids that there are better ways to get your words in than shutting someone else down.

‘I Can’t’ Of all the ‘banned’ words, this one is the most important for me. This is one of those examples where words you say to yourself can be harmful. I try to teach my kids to say, ‘I need help’ or ‘I’ll try it again later’ but I Can’t is a no-no. We all can… and if we fail, at least we can say we made the effort!

‘Stupid’ This word, and all of it’s connotations are simply banned. I can’t stand to hear it, I can’t stand to say it and I can not think of a way that it actually makes sense. Yes, people do things all the time that have me scratching my head. But people are not stupid, even if one or more actions seem like they are. So I won’t let me kids use it as a descriptor. Ever.

‘Hate’ I personally think the word hate promotes, well, hate. So I don’t allow it in my house. I think this word can not only promote bullying and an unhealthy outlook on one’s self, but if it is used too often, it becomes a mantra. So if my kids don’t like a food, they have to say, ‘It is not my favorite’. If they don’t like they way something looks on them, they have to say something positive instead. ‘I think I will put on the blue dress because it matches my pretty eyes!’ They are never allowed to say that they hate another human. They can say that they don’t care to hang around them because they feel they make bad decisions. I just don’t like the word and the meanings at all.

‘Idiot’ This one goes along with stupid. No person should even be describing another in derogatory terms. So though we see this on popular TV shows all the time, which is a whole other issue with me, we are not allowed to repeat it!

‘Crap’ A while ago, I let this one slip. I was irritated that so much stuff was on the floor in the house and spat out that they have too much crap! After that I heard it a few times. I actually consider this to be a cuss word, and we all know cuss words are basically tacky coming out of the lips of babes, so I banned it. No longer do I have to hear, ‘this dinner is crap’ from my kids!

‘Whatever’ Discounting someone in any way is not OK. Whatever makes me want to scream! The toss of the head, the absolute invalidation of the person it’s being said to and the ride attitude that comes with it as a derogatory statement drive me mad! As I enter the teen years in a few, I know this will be one that gets thrown around. Maybe if I can stop it now, they will use something else to explain their frustration!

Now, I am not going to sit here and say that these words never escape my kids, and my, lips. But I make a real effort to make them understand that there are more respectful ways to say something. I can’t stand language that is filled with judgement and shaming themselves or others. So I make this a priority!

What words are banned in your house?