I Got to Film Wreck It Ralph! Well… Sort Of #WreckItRalph #DisneyOzEvent

I Got to Film Wreck It Ralph! Well… Sort Of #WreckItRalph #DisneyOzEvent

If you have read my blog, checked out my Facebook page or followed the hashtag #DisneyOzEvent, you know that I spent the better part of last week in Los Angeles doing press for Oz the Great and Powerful.  But there was another reason I  was excited to go on this trip.  And it had nothing to do with a tornado.

Well, unless you call the lovable, indelible Bull in the China Cabinet, Wreck It Ralph, similar to a tornado!

I was so excited to spend the day at Disney’s Animation Studio meeting the amazing creators, the Riggers, the Animators and the Capture Video staff that made it all happen.

Honestly, I know so little about animated film making that I thought animators drew every single frame and that is why animated movies take so long to create.  I had no idea how many computers and electronics and art and story boards and people – 450 just for Wreck It Ralph – it takes to make a thought process a character and make that character a reality. 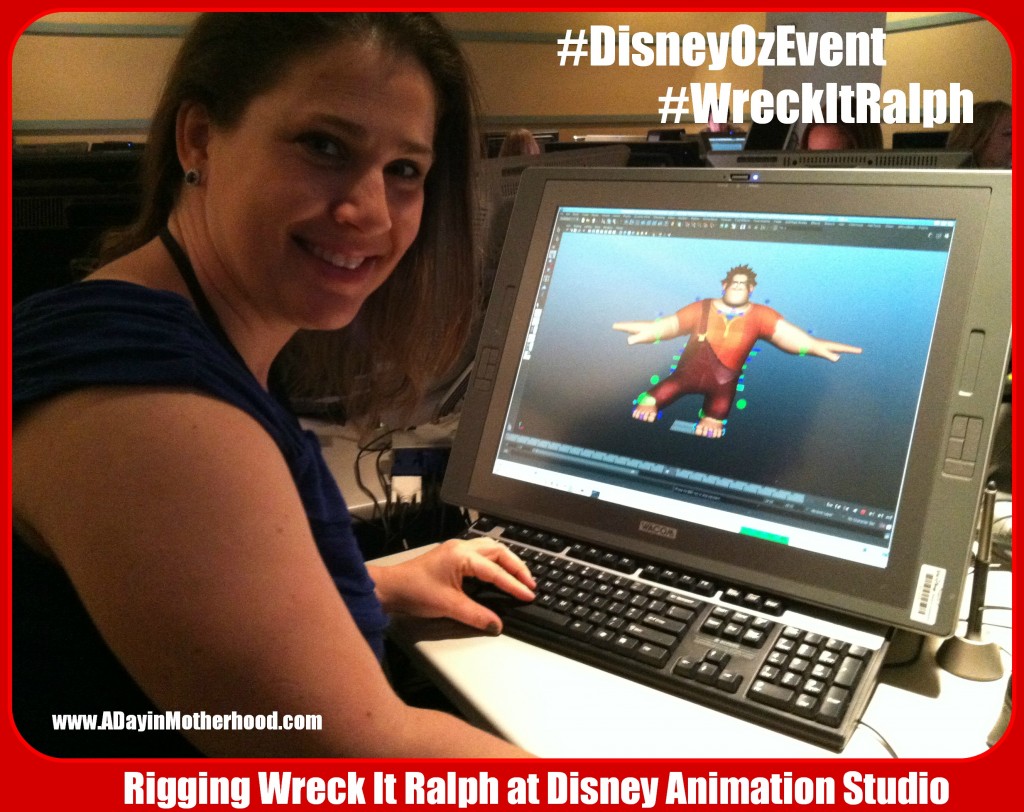 So as I was guided through the coolest office ever – seriously, they have houses as offices, just so cool – I clung to every word that was said about every little detail.  We listened to the progressive explanation of Ralph himself, the details about making Venellope’s eyebrow’s low like Sarah Silverman’s and more.  As we made our way around, we met the most amazing and passionate people who gave us an idea of how animated the people behind the animations are.

One of my favorite rooms was the Rigging Room.  Now knowing what it was, I was excited to sit down and learn about the ever so detailed stage between story board art and full on animation.  I even got to sit at my own computer and make Ralph do something.  How did I do?  I think it is the Jive, but I’m not really sure!

So, rigging, as I understand it is giving an animated character the act of motion.  But the really cool room that we visited was the Camera Capture room.  Now, because characters are drawn or painted or created digitally, the process of giving them motion is  a challenge.  It takes many steps and people and real motion are involved.

We entered a large room that had a taped off rectangle, several large television screen and 6  cameras up above.  The object of the game was to simulate the characters movements and then give them motion.  But Camera Capture also gives the characters in motion depth.  In this video of me operating the camera – they clearly were not told of my clumsy status – I could manipulate the camera to show the character with depth from behind, show the action as he ran and more.  It was really cool and though I am not a ‘technical’ kind of girl, I truly enjoyed learning all about the process. See how good I am at it?

Although, when I asked if I was hired, I was told NO.  Hmmmm….  guess I’d better not quit my day job!

Check out the slideshow below of some of my favorite shots from the day and stay turned for more Wreck It Ralph announcements and Oz the Great and Powerful posts!

Wreck It Ralph is now available for FULL  MOVIE Download from AMAZON and iTunes!