The Legend of Korra: Book One: Air

The Legend of Korra: Book One: Air

The Legend of Korra- Book One: Air is an exciting adventure brought to you by the creators of the Award-winning Avatar: The Last Airbender.

Korra is a girl from the Southern Water Tribe who is reincarnated when Avatar Aang passes away.  Korra travels to Republic City after leaving the safety of home and her guardians who urge her not to go.  The skills that Korra’s Avatar have developed come in handy when she is tested with a group of Chi-blockers who are led by a masked man, Amon.  Amon and his Equalists plot to take over control of Republic City and the “impurities” of bending.  Capturing Amon and putting an end to his ultimate take-over becomes the top priority for Korra and her friends! The Legend of Korra-Book One: Air is an adventurous story that will have you hanging in the balance of justice!

BUY YOUR COPY TODAY From AMAZON 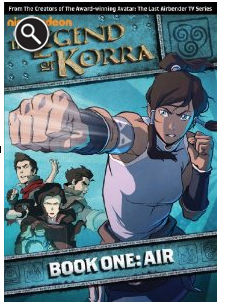 A fast-paced and engaging story that will unravel more of the mystery!

The Blu-Ray of this movie has some awesome bonus features too!  The original short is included, audio commentaries from the series creator, cast and crew and eight animatics from the creators favorite scenes!

First premierinig on Nickelodeon in 2012, this popular series is a must see for tweens and teens everywhere!

You can pick up the new DVD in stores or online now!