Cartoon Network is excited to bring you the awesomely animated comedy series, Regular Show: Complete First and Second Seasons on Blu-ray on 2 discs, and DVD on 3 discs.   This includes 40 episodes with bonus material!!

The Emmy award-wining hit comedy for Outstanding Animated Program is part of the popular Monday night line-up on Cartoon Network.
Mordecai and Rigby, best friends, unite to explore extremes and keep their boredom at bay! 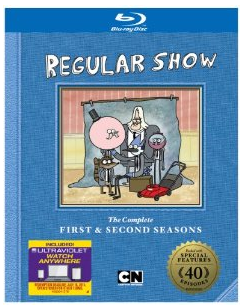 These two friends are slackers who love video games and usually start their show with a simple problem.  Their problems snowball until they are completely out of control!  Though this show might not be for the younger audience, certainly older children can relate and enjoy the humor found in the Regular Show!  This show is fantastically humorous even for the parents (Whahoooo)!!!