is one of those shows that I SO wanted to see when it was on air but just could not get to.  And so I am THRILLED that I get to see Ashley Judd as Becca Winstone, a mother and former CIA agent, who is on the hunt for her son who is… Missing, on DVD. 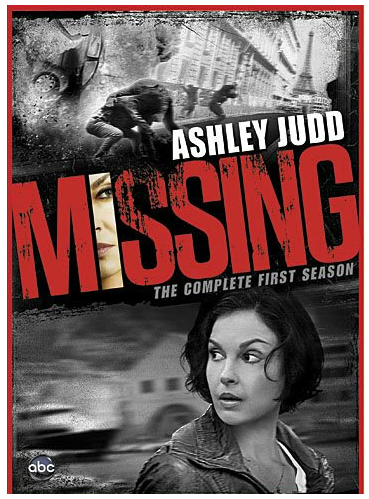 Traveling to Europe  -where her son disappeared – we learn that she was discharged from the CIA after the devastating loss of her husband.  She meets roadblocks, unexpected traps and old enemies determined to see her fail in the search for her son.

This International series was off with a bang and moved along through the story well!  I got into it and found myself trying to figure out what was going to happen next at every turn.  Well acted and directed, Missing is a show that you can really get into!

The DVD, released June 12, 2012 on DVD, boasts bonus features like interviews with Ashley Judd and the directors, the complicated process of shooting an international show and deleted scenes that were not shown on television.  It is fun to try to think how the show would have changed if the seven deleted scenes were actually put back in!

If you like a good suspense thriller, Missing satisfies that need.  The stunts, the story line and the plots are creative and fun!  Check out this clip below:

Pick up your copy of Missing: The Complete First Season in stores or online!

And because everyone should have fun TV series like this on their shelves, one (1) of my readers will WIN the first season!  Just enter via the Rafflecopter form below!

**I received this product for review purposes only.  My writings and opinions are my own.  Please see my disclosure statement for further details.**