Listen to the Birds: An Introduction to Classical Music Book & CD

Listen to the Birds: An Introduction to Classical Music Book & CD

Thank you to real mom, Bonnie, for this honest review!

“Throughout history birds have caught the imagination of composers and inspired their creativity.  This selection of works by Mozart, Tchaikovsky, Vivaldi, and others introduces children to classical music through the discovery of the melodious similarities between notes produced by instruments such as the flute, the organ, and the harpsichord and the birds’ songs.  In addition to lovely illustrations, the 64-page book features a glossary of musical terms, a short biography of each composer, and a brief description of each bird evoked or mentioned in the composition.”

I will admit…my children have heard more pop, country, and rock music than they have heard classical music.  I’ve never been one to be into classical.  Until now.

I’m the type of person who, unfortunately, at times needs stuff pointed out to them.  I don’t often dive into things- just take things for face value.  In my mind classical music is just music.  It’s the songs without the words.  And really, what is a song without words?  Boring!   Or so I thought.

I came home from work one day and decided that while I was making dinner I’d put this in and we’d start listening.  I probably shouldn’t have done that.  Before I knew it the spaghetti was boiling over, the sauce was blowing up and the garlic bread was, well, lets just say you could break a window with it.  I stopped long enough to sort of clean up the mess and we continued listening and reading until the pizza man showed up. 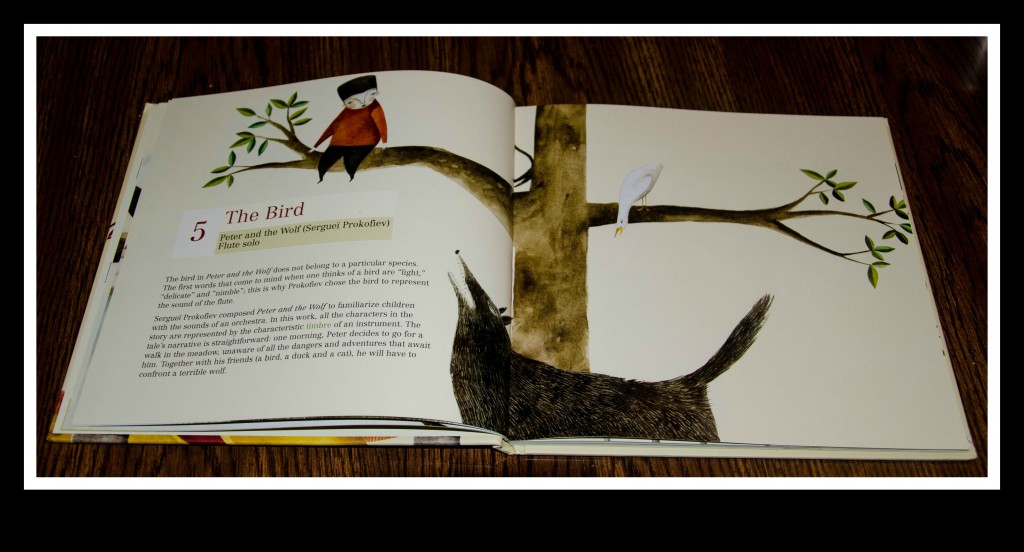 After the pizza man came we continued to listen and read.  Well….they listened….I read.  The more I listened and the more I read…the more I realized how much I was missing with classical music.  Listen to the Birds has really opened my mind to the genre.  I never took the time to really listen and understand that it is telling a story- like Peter and the Wolf.  While listening to the music I was actually able to tell the story in my head.

I absolutely love that Listen to the Birds comes with the book.  For each musical selection there is a brief write up (like in the photo above), there is a “Listening Guide”, a write-up on each of the composers, and a glossary of musical terms.

Now I know what some of you are thinking.  You’re thinking that there is NO way that you would like this.  And I say you’re wrong.  There’s virtually no way that you can’t like it…..unless you don’t like music at all (even then I’m not sold on you not liking it!).  BUT I suppose there’s only one way to find out.  A Day in Motherhood and The Secret Mountain