It is finally here! Lalaloopsy on DVD! Yep, starting February 4, 2014, you can get the Friends are Sew Special DVD on shelves at your favorite retailer! My girls FLIPPED when they saw this come in the mail! Lalaloopsy on DVD? Who knew? This fun to watch, multi-episode DVD makes every friendship important with lessons that all kids need to learn! 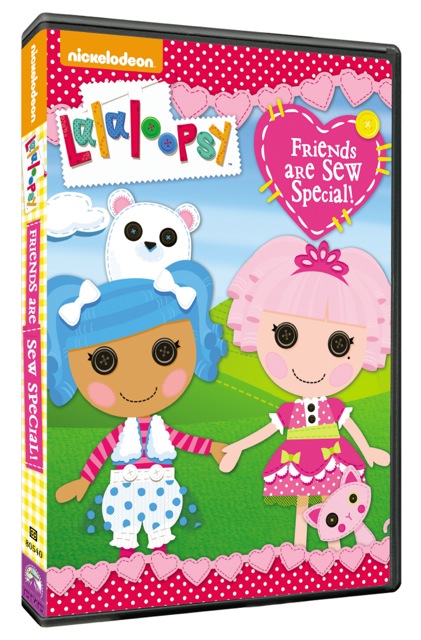 My girls took a trip to Lalaloopsy Land and watched as the Lala’s overcame obstacles with over an hour of magical fun! And for a limited time only, you’ll get a “Sew Cute Lacing Kit” inside, which includes laces, stickers and different pattern cards to design! Created by Nickelodeon Home Entertainment and distributed by Paramount Home Media Distribution, Lalaloopsy: Friends are Sew Special! will be released on DVD just in time for Valentine’s Day on February 4, 2014!

Lalaloopsy is an animated adventure series starring the Lalaloopsy friends, who magically came to life once their last stitch was sewn. The lovable characters are all unique. Each has a personality that comes from the fabric that was used to make her, with a pet and house fancifully constructed from found objects to match. The group of friends comes together for daily, “fun-tastical” adventures in a whimsical world full of silly surprises called Lalaloopsy Land. While each “Lala” has different talents and points of view, it’s these differences that make this world such an exciting place where anything can – and does – happen! Lalaloopsy is a celebration of diversity and teamwork, teaching preschoolers that everyone is special in his or her own way and each of us has something important to contribute.

Check out the awesome episodes included:

Dot’s Moon Mission
When Dot’s spaceship breaks down and prevents her from taking a long-planned trip to the moon, her friends create a fake moon for her in Lalaloopsy Land.

Princess Parade
Jewel enlists her non-princess friends to help throw a Princess Parade to show off her tiara collection and learns that there’s more than one way to be a princess.

Spot-it-is
It’s up to Rosy to cure her friends of a mysterious illness spread through Lalaloopsy Land.

Flight Plan
Pix E refuses to let her fear of heights get in the way of disappointing her friend and her dream of flying.

Want to WIN a copy of this awesome DVD before it hits stores? Just enter below and GOOD LUCK!

Congratulations to our winner: Mayela L.!!!