March is Women’s History Month, and today specifically is International Women’s Day. With that in mind, I thought it would be a good time to take a look at many of the women who inspire me, specifically those who are single mothers forging it alone in the world of parenting. 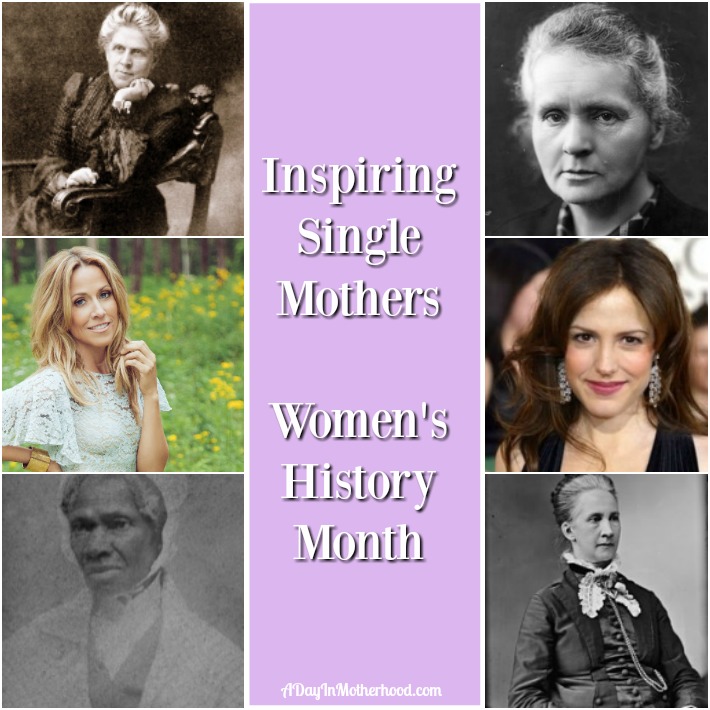 No one wants to be a single mother, but single motherhood happens. When it does, it doesn’t mean life needs to be put on hold. Things may become harder to do. With a passion and the right mindset, though, single mothers can still pursue their dreams and raise brilliant children willing to do their part to make the world a better place.

Take a look at a few of these single mothers, and hopefully, you will find the inspiration to continue on your motherhood journey – single or not. Some are alive today, some are from history. Some became single through choice, others out of unfortunate circumstances. The one thing they all have in common is that they never gave up.

Sojourner Truth – She was given in marriage, but the rest of her history seems to be done as a single mom. The first black woman to take on a white man in court and win is absolutely inspiring.

Marie Curie – The first woman Nobel Peace prize winner also raised her daughter alone after her husband died when their daughter was only 9.

Sheryl Crow – Despite a few relationships never landing in marriage, Sheryl chose to adopt 2 sons by herself. Choosing to be a single mother is impressive, but doing it while leading a high profile life I feel is something special.

Harriet Strong – What a strong woman! Her husband committed suicide after a number of business failures, leaving her to raise their 4 daughters alone. It was her innovative ideas on water conservation that led to the Hoover Dam being built.

Mary Louise Parker – Another actress in the limelight doing what she can for her family and helping victims of Uganda’s civil war. Her child’s father left when she was 7months pregnant, leaving her to raise their son alone.

Belva Lockwood – Her husband died when their daughter was only 3. During a time when women had little rights, she went on to receive a higher education to support herself and daughter. Eventually, she was the first woman to officially appear on a Presidential ballot.

Lorelai Gilmore – OK, I know she’s fictional, but what a stong example of a single mom doing her best for her kid. I could watch Lorelai all day long.