Gather your children, your imagination and your musical inclinations and head to the Houston Symphony for Pixar in Concert Friday, July 19, 2013 and Saturday, July 20, 2013!

My girls are going to FLIP when they go on the 20th to hear their favorite songs played expertly for their enjoyment! 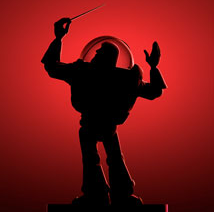 From the Toy Story trilogy to The Incredibles and UP, Pixar has forever impacted filmmaking and given audiences of all ages some of the most beloved characters in cinematic history. Now, for the first time ever, the Houston Symphony presents Pixar in Concert, with visually stunning clips and memorable scores from each of Pixar’s thirteen movies, including their latest release, Brave.
Presentation licensed by Disney Music Publishing © Disney/Pixar

I may even have them go as their favorite Pixar character just to be whimsical!

If you are like me, you want your children to develop a love for all musical styles.  And there is something quite special about taking your children to an artistic event that they will remember forever.  We have a CD of Pixar music and my kids play “Guess the tune” all the time. So it will be amazing to watch them guess them in real life!

Let your children’s eyes open in amazement as their favorite characters and scene’s accompany accomplished Thomas Wilkins, the conductor, in a walk down Pixar’s famed movies musical roads!

And learn more about the Houston Symphony’s Summer Concert Series below: