Gifts for 3 Year Old Girls: The Magic School Bus:Revving Up & In a Pickle DVD Review

Gifts for 3 Year Old Girls: The Magic School Bus:Revving Up & In a Pickle DVD Review

Get ready to educate your kids in a way that they think is nothing but FUN! The Magic School Bus has become a family favorite around here and I think it one of the best Gifts for 3 year old girls  – and boys too! Their two latest DVD’s to hit the market have been played here like crazy too! 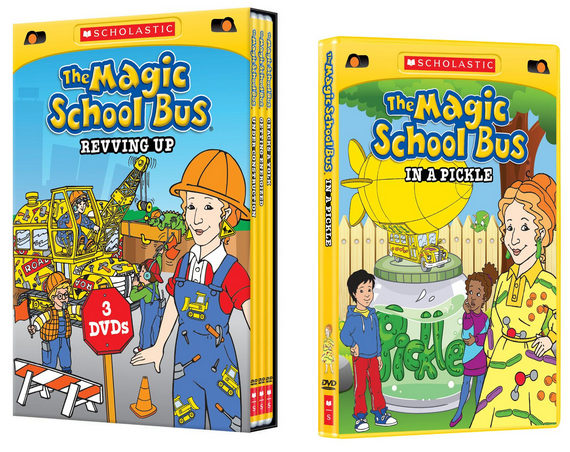 Get on the bus and take a fun filled  – and educational – field trip with Ms Frizzle. Twelve never before available episodes are in these Emmy Award Winning DVD’s.

Explore everything from the smallest cell to the largest galaxy in twelve never-before-available episodes of the Emmy Award®-winning TV series in THEMAGIC SCHOOL BUS: REVVING UP. Each of the three discs in the set – “Under Construction,” “Getting Energized” and “Cracks a Yolk” – contains three new episodes running the gamut from computers and electricity to city critters and desert adaptation. And each DVD also contains a special bonus episode adding up to more than four-and-a-half hours of Frizz-tastic fun!

Ever wonder what’s behind a peculiar smell? Viewers who hop aboard the busfor IN A PICKLE are sure to find out across four never-before-released episodes including the title episode about microbes, along with “Meets Molly Cule,” “Makes a Stink” about smell and “Meets the Rot Squad” which covers decomposition.

My kids watch this show in school and even check out the books from the library. A win win for me when a movie they seem encourages reading as well!

Get your copies in stores and online NOW!