Elf on the Shelf ideas are usually blooming until about ten days in to the event… then, I got nothing.  These ideas are a collaboration of things tried by me and some friends, and other fun NEW ideas for you to use this year! Don’t be shy, add your own twist to really personalize them for your home. Thank you Bonnie, Lynn, Anna, Jeanette & Heather for helping to exhaust a wonderful list of ideas on how to post your Elf on the Shelf this year!! 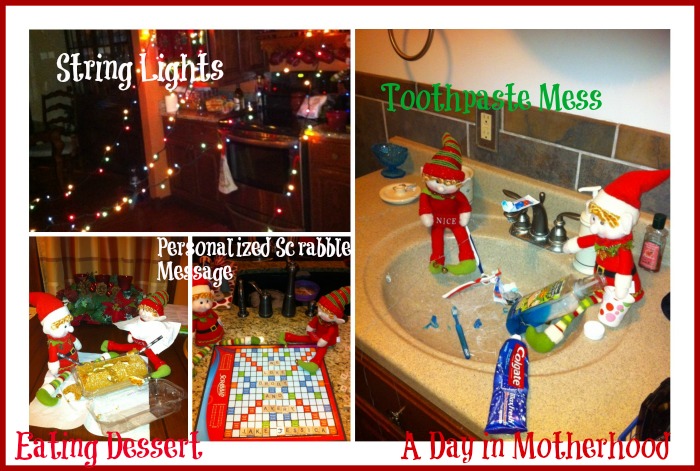 5. Elf plays with Nerf darts and they are all over the door/window.

6. Elf makes a small lettuce salad and uses chocolate syrup as the dressing.

7. Elf plays in shoes, puts them on and uses jewelry/accessories to match.

8. Elf uses yarn to make a Zip Line across the room and dangles from the middle.

9. Elf receives post card from Santa addressed to Elf and Children to check on them.

10. Elf smears chocolate all over window and draws a picture or heart with the child’s name in it.

12. Elf makes a mess with toys and covers the mess with a small rug (but misses some toys). Rug is quite bumpy.

14. Elf attempts to make child’s lunch for school, but packs bad choices (like tons of candy and a toothbrush)

15. Elf uses cutting board as a skate board to go down the steps.

18. Elf plays in bubble wrap and falls asleep all wrapped up.

19. Elf uses flashlight to dig in snack cabinet. Child sees only the flashlight and elf’s feet dangling out of the cabinet. 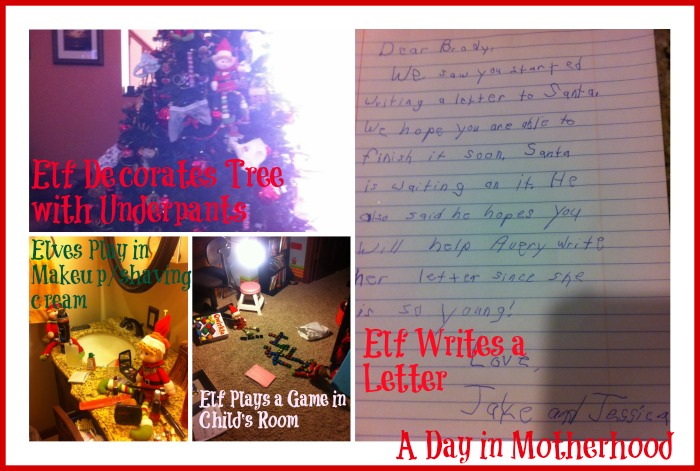 25. Elf Makes mini sandwich and takes a tiny bite, use a small lid as a plate and a thimble as a cup.

26. Elf was listening to the iPod all night (Holiday music)

28. Elf leaves a huge coloring book/crayon mess, but colors a picture for the child.

29. Elf snoops in child’s drawer and throws out all the clothes.

30. Elf plays with the camera and takes pictures around the house house/Pictures of Santa, kids sleeping, dogs sleeping etc.

31. Elf has a good time swinging from the ceiling fan all night.

34. Elf snoops in stocking and feet are hanging out of it in the morning.

35. Elf plays with iPad and uses ear phones taped to head. The elf is looking at holiday website.

36. Elf is sitting at computer desk where he has an email ready to go to Santa.

37. Elf draws a picture of self with kids and puts it in a frame.

40. Elf goes fishing pet/dog/cat bowl with a string taped to a straw. Gold fish crackers are in the water. 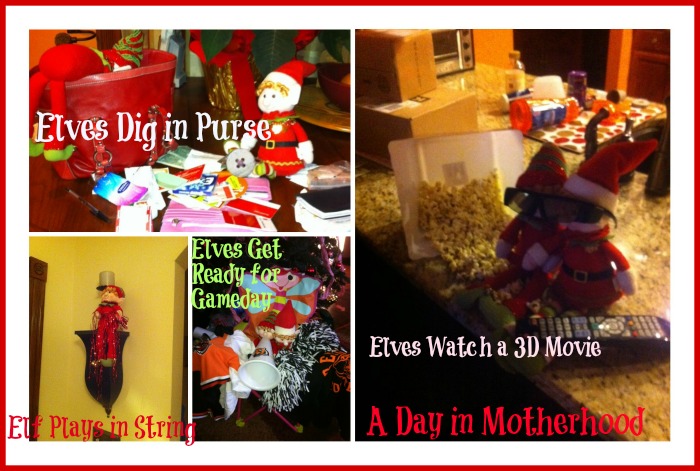 45. Elf completes work in Child’s workbook (not in school textbook).

46. Elf eats mini-pancakes, parents will have to make some quarter sized pancakes, put syrup on them and serve on a doll plate.

47. Elf plays duck duck goose with stuffed animals, everyone is sitting in a circle in the living room.

48. Elf rides the train under the Christmas tree with a ticket in his hand marked “North Pole.”

49. Elf decorates tiny Christmas trees and leaves them in the child’s room over night.

50. Elf makes a mess with wrapping paper, but wraps a gift up for the child, a poorly wrapped gift with  a lot of bows.

53. Elf wraps up one of the child’s old toys to re-gift to them, but leaves part of it unwrapped so the child can see that it is not new.

54. Elf tastes the dog or cat food/hangs out of the bag or treat bag.

55. Elf makes a bed in the towels after making a mess in the bathroom.

57. Elf stacks canned food up to try to get into high cabinet (searching for snacks).

59. Elf puts on little scarf, child’s socks and shoes as if he/she was playing outside all night.

60. Elf makes a mess with mini marshmallows and attempts to use the vacuum to clean it up but doesn’t do well cleaning. 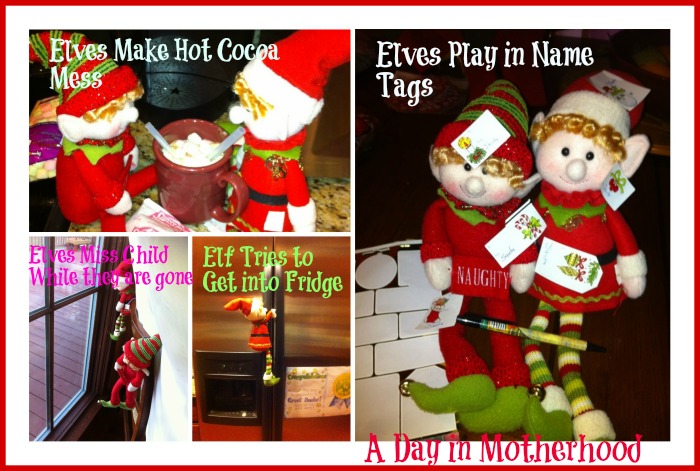 65. Elf brings scooter in the house and rides on it (or any outside toy).

71. Elf sets up dominoes for child to knock down the next morning.

72. Elf eats some banana that has been covered in chocolate.

73. Elf sits by fish tank, looking in, relaxing as if on a beach. Use a wash cloth as a beach towel, and cut sunglasses out of a magazine or construction paper.

76. Elf plays piano with music he has made up and words that include the child’s name.

77. Elf gets into the flour to create a winter wonderland in the kitchen.

78. Elf stares up into the chimney looking for Santa.

79. Elf lays on his belly staring at a snow globe.

80. Elf is in the freezer because he got hot. 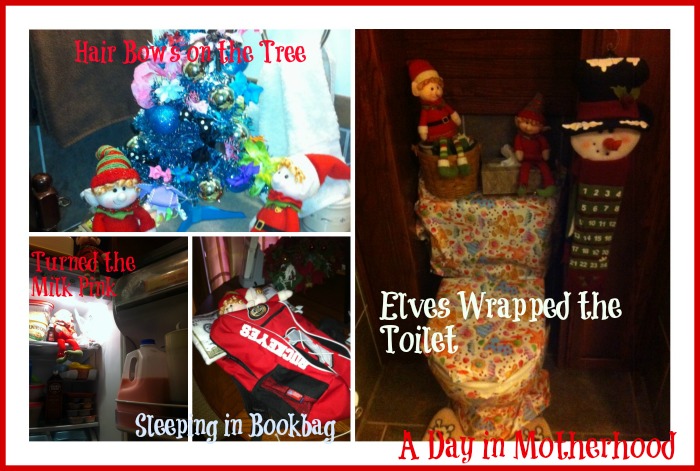 88. Elf plays drums using pots and pans all over the kitchen with wooden spoons.

89. Elf draws a picture on the dry erase board/chalk board.

90. Elf makes paper airplanes and throws them all in the tree and on the floor while lounging on the couch.

91. Elf uses lipstick or lip liner to leave a note on the mirror in the bathroom.

92. Elf uses wrapping paper rolls taped together end by end to create a long tunnel going down the stairs, rolling mini marshmallows down the chute.

93. Elf falls asleep in the tree with cookie crumbs on his face and half eaten cookie next to him.

94. Elf plays with toy figures setting up a whole scenario with Barbie or Mavel characters.

95. Elf crushes a bunch of peppermints and leaves a note saying he played “candy crush”

96. Elves play stairs bowling with toilet paper rolls and empty water bottles at the bottom, they roll the paper out down the steps.

99. Elf adds tons of extra candy/marshmallows to the gingerbread house/ or tapes packaged candy to the Barbie dream house to decorate it.

100. Elf tries to feed wrapped candy cane to the dog (out of reach, and not close enough to tease the pooch).

101. Elf hides in cereal box, spills some and falls asleep in it.

102. Elf is hanging from a doorknob trying to open the door.

103. Elf opens a ton of junk mail (save it up for a couple weeks) and enters contest (PCH) or signs up for things using his name.

106. Elf hangs head upside down looking down onto the TV while a Holiday movie plays.

107. Elf uses one of your family holiday cards to fill out and send to Santa letting him know that he loves his temporary home and that the kids are being so good.

108. Elf has spread out all of the holiday movies and cds to see the entire collection.

109. Elf creates a simple craft and asks you to paste a picture on Pinterest.

110. Elf fills all the stocking with pine cones.

112. Elf hides a stash of sweetened condensed milk in the children’s stockings.

113. Elf takes out all of the baking supplies to make cupcakes and icing, mixer, pans, utensils and a box of cupcake mix. He leave a note that says “Here I helped you get your day planned.” 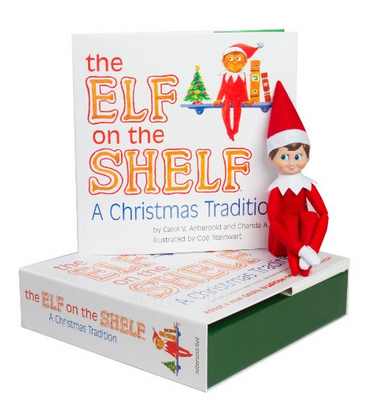 114. Elf is found in garage in tools starting to work on a toy.

115. Elf is found in the fridge with a straw in the Hershey’s syrup drinking right from the bottle.

116. Elf leaves a silly “Wish list” with things like: cooked bacon, open toed socks, paper towel roll,  chalk (or other silly things that the kids can leave for the Elves to take with them Christmas Eve when they leave.)

117. Elf strings together a bunch of craft bells and places them on the tree so he/she can hear Santa when he gets to your home.

118. Elf uses Dad’s hat to make a bath using cotton balls as bubbles. Put soap next to him, shampoo, and cologne.

119. Elf gets stuck in couch crack with the TV remote, while he was trying to pull out a $1 for each of the kiddos.

120. Elf tries to hide in child’s coat pocket to go to school/daycare with them.

123. Elf sets up a mini yard sale in the living room trying to sell the kid’s toys for 1 cent each.

124. Elf puts all of the sports balls, bouncy balls, golf, tennis etc. in the living room.

126. Elf fills a bunch of balloons and hangs streamers around the room as if he/she had a party.

128. Elf has a paper bag race with the stuffed animals.

129. Elf used streamers to tape on outside of child’s door so child has to bust through in the morning.

130. Elf puts a couple boxes of candy canes all over the tree.

132. Elf makes a blanket fort in the kitchen and falls asleep on a pillow.

133. Elf  sits on the window ledge, draws ATNAS IH with crayola window markers, so Santa can see “Hi Santa” from the outside.

135. Elf makes snow angels in sugar on the counter.

136. Elf rides toy horse, dinosaur and creates a park/farm area with other toys.

137. Elf gets the sniffles and has made tea, with a tea bag in a cup, thermometer and wrapped in a blanket. Makes a mess with tissues.

139. Elf makes a mess with a box of jello all over the counter, as if he/she was going to make some and ends up just getting a spoon to eat it.

141. Elf makes muffins for the children for breakfast, but leaves a huge mess in the kitchen.

142. Elf leaves a recipe for Santa’s favorite chocolate chips cookies, but it is silly having “2 cups Love” “1/4 Cup silly laughs” “Pickle seeds” and other funny ingredients.

143. Elf decides to dress up in Ken/Barbie’s clothes and hang out watching a movie.

144. Elf decides to decorate the living room in inappropriate holidays such as Easter, Valentine’s Day, Halloween, 4th of July etc.

145. Elf circles silly wish list items out of sale catalogs from the mail.

146. Elf stains an old shirt with chocolate syrup and tries to use a stain stick or other cleaner to wash it in the sink but makes a mess instead.

147. Elf leaves a calendar on the counter with December 25th circled, and writes “going home, see you next year.”

148. Elf spills sprinkles out all over the counter while trying to make a “sprinkle sandwich.”

150. THE LAST NIGHT, IF YOU CAN GET A SANTA SUIT, THE ELF TAKES A PIC OF SANTA’S BACK PUTTING GIFTS UNDER THE TREE WITH YOUR PHONE/CAMERA. 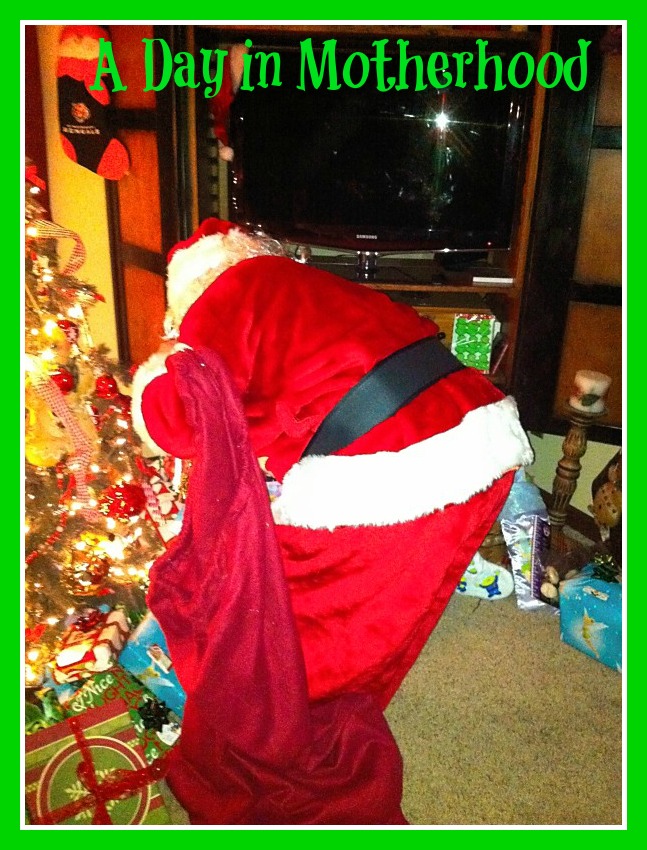 For other Holiday Ideas, see our 2013 Holiday Gift Guide