There is a movie that I have fallen in love with that I never thought I would.  A movie that has the excitement of an action film, the heart of a good drama and the comedy of… well, a comedy.  And I missed it in theaters and have been kicking myself ever since! 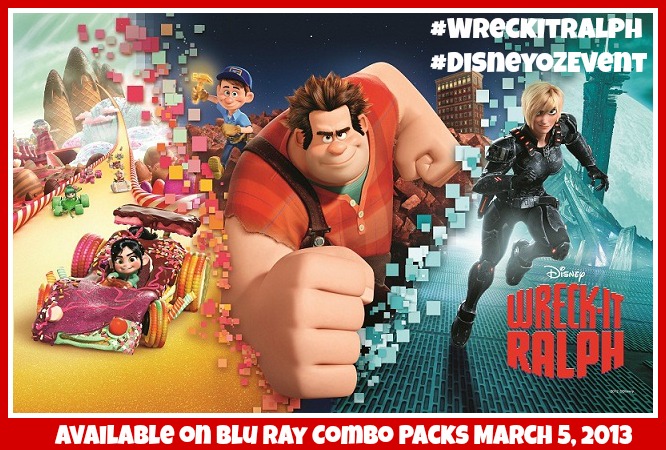 Wreck-It Ralph is a testament to the 450 people who worked on this film for years and years.  Like 6 years.  It is a true treasure and every family should have this on their shelf for family movie night!  The colorful, fun, animated oaf that turns out the be the ultimate softie is really hard not to love.

My kid’s dad took them to see it in theaters and when they told me about Vanellope and Ralph and Felix, they were already fast friends.  I should have scooped them up right then and seen it with them just to watch their excitement!    But I waited and got a serious perk when Disney sent me a preview of the DVD right before my trip to go learn all about how Ralph came to life!

See the clip below:

Look, I am not going to lie to you.  This has to be on of the BEST animated films I have seen cross these eyes.  And I really don’t think I am biased just because I got to learn all about him.  It really is just a really, really good story.  The Academy of Motion Pictures agrees with me too because Wreck-It Ralph was nominated for Best Animated Film this year.  Brave topped the category but I am telling you, THAT should have been the tie this year!!

Here is the skinny.  For years, Ralph has been the bad guy, busting through bricks and walls in a popular video game.  And frankly, he is tired of it.  He wants to change who people – other video game characters – think he is and be more like Fix It Felix, whom everyone loves.  He wants to prove that he is a true hero with a big heart.

As he leaves his world and discovers new ones, he meets the hysterical and feisty Vanellope (played by equally feisty Sarah Silverman).  As he continues his journey to change the way people look at him he realizes that he holds the fate of the entire arcade in his hands!

This tale of adventure, self discovery, ambition and eventually, acceptance is a must own.  Even if you don’t have kids, this movie is still one that you will want to get your hands on and enjoy time after time!

The Blu-Ray Combo packs, available online and in stores March 5, 2013, also include some amazing bonus features!

The Paperman – and 2013 Academy Award Winning – theatrical short follows a young man trying to get a girl’s attention that he has only seen from his office window.  And endearing tale that is as old as love itself,  the animation and story are new and inspiring.  This wonderful short is included on the Wreck-It Ralph Blu-Ray Combo pack!

You can also track the world of Ralph in the Bit by Bit feature – sort of taking the same journey I did, but at home from your couch.  Add to that deleted and alternate scenes, the original video game commercials from the film and the ever expanding popular Disney Intermission: The Gamer’s Guide to Wreck-It Ralph and you have it all!

Go shopping, buy the movie and some popcorn and gather your loved ones around to fall in love with a character we can all relate to on some level!  The lessons he learns becomes lessons we can carry on day to day.  And this spectacular and imaginative movie is not one you will forget easily!

And while you are at it, be sure to pick up the Wreck-It Ralph Soundtrack!

This 25 song CD with all of the tracks from the movie is in my CD player and on any time we are in the car!  It is just good fun! 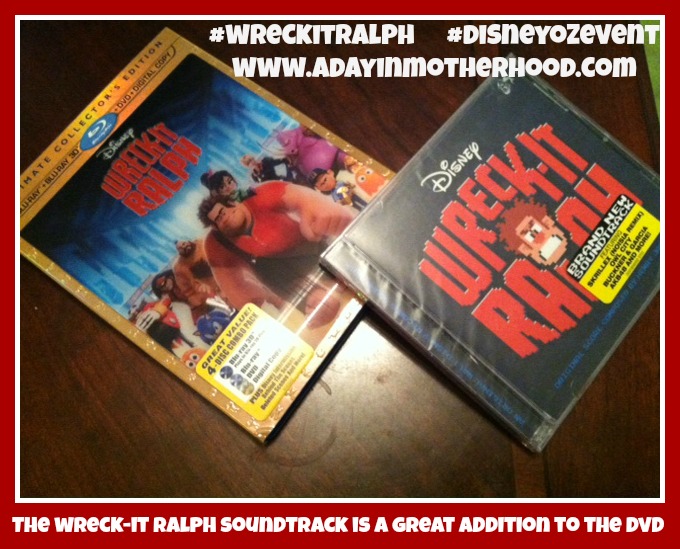 I know you are all out at the stores getting your copy, but take some time to WIN an extra from me!  (1) of my readers will WIN Wreck-It Ralph on Blu-Ray combo pack.  Just enter below and GOOD LUCK!

**I received this DVD for review purposes only.  All writings and opinions are my own.  Please see my Disclosure statement for more information.*