For about a year now I have tried, unsuccessfully, to get my almost three year old of of bottles and my four year to drink out of more than her one and only cup she uses.  I have tried harder than others at times but knew that something had to be done.   Especially for the littlest one.  A bottle at three was even too much for my relaxed parenting style.

So when I was asked to review Tommee Tippee Explora Sippy Cups that are sold at Target, I jumped at the chance thinking that this could be my tool to the turning point! 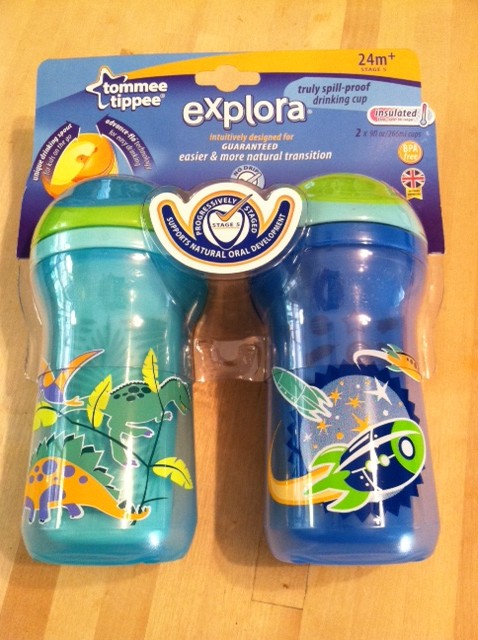 I received a set of two cups, one with a dinosaur on it and one with fish!  I could tell immediately that these cups were going to solve one huge issue that I have with sippy cups in general.   These things are not going to leak.  The tops screw on tightly, the insert in the top fits snugly and is not made of thin bendable plastic which means it won’t have a hold in two days and there is nothing escaping from the opening on the top of the cup.

These very durable cups are bright, easy for little hands to hold and cleverly designed to prevent leaks no matter how far the cup falls to the floor from the counter!  My 4 year old Sarah is extremely particular about her cups.  She has one cup that she likes and I get so tired of cleaning it time and again and hunting it down when she wants some milk.  Plus, it had a flimsy rubber nipple much like a bottle and I personally feel she should be off of them. 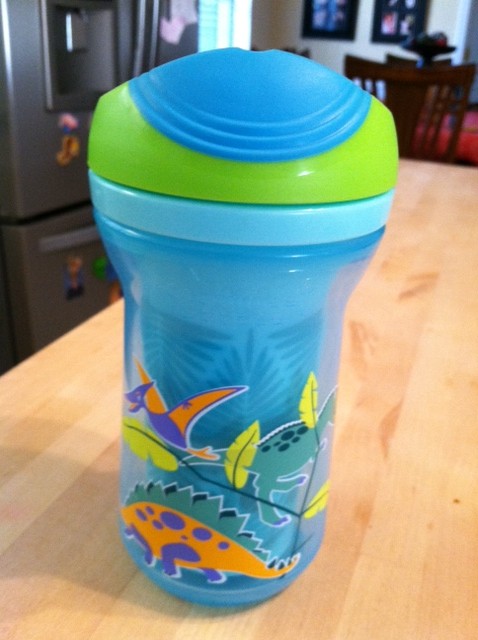 I called her over to look at the Tommee Tippee Explora Sippy Cups and she was immediately intrigued with the cup with the dinosaur.  In a house with three daughters we don’t see a lot of dinosaurs.  I asked her if she would try to drink her milk out of them and she said no.

And then about ten minutes later she asked if she could have it. Once she drank out of it and I celebrated as if she won the Nobel Peace Prize, she was hooked!  I was ecstatic!  And she still requests the cups today!  An amazing change that I never thought I would see!  Plus she shows everyone her new cup and is really proud of her ‘big girl cup’!

As for Megan, I have been lax about forcing her off the bottle.  I know, I know… terrible.  I figured one day I would have to put my foot down but was still looking at the calendar trying to pick a date.

She, like Sarah, flat out refused to drink from the Tommee Tippee Sippy Cups.  So I left a cup with milk  – the one with the fishies – on the coffee table and made a huge stink about Sarah’s progress.  Then I made a comment about how the fish would be lonely and cold without someone to hold the cup and love the fish.  Megan picked it up and carried it around.

**Note: So we have had these cups no less than two weeks.  The girls drink out of them and love them.  Apparently, however, my mind was made up that there were fish on Megan’s cup because despite having a ton of photos, showing her the cup and discussing it and just plain seeing, it took a reader to email me last night and tell me that there are no fish on these cups! Yea….  Megan’s cup as a rocket ship and planets…  sooo not fish!  I can not stop laughing at my mommy brain!  Thank you Brenda for pointing out my error!  But, truth be told, I am still going to tell Megan that it is fish…  it works!  ROFL!

And then it happened… she drank from it.  And again… and again!

I gave it a few more moments and drinks before I start celebrating like mad!  Megan is taken aback but squeals with glee as I spin her around.  Later that night she asked for her bottle and I reminded her that the fish needed her. She hesitated but again drank out of the cup! 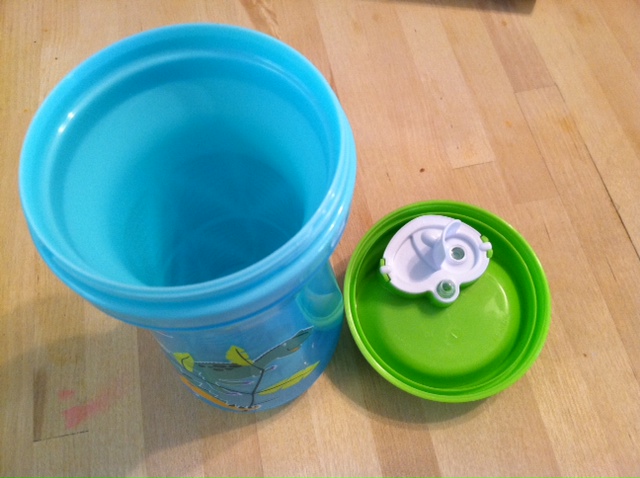 I am so thrilled that my girls love these cups and am excited to get to Target to purchase some more!  In the few weeks we have had them there have still been no leaks.  That is my kind of happy and so worth the trip!  Plus, the cups are BPA Free and dishwasher safe!

Head over to Target and get your Tommee Tippee Sippy Cups today!

Do you have a child struggling to sippy cup train?  Or have you never found that cup that truly won’t leak?   Enter to win a pair of Tommee Tippee Sippy Cups too!  Just click [continue reading] for easy Rafflecopter entry:

I wrote this review while participating in a blog tour by Mom Central Consulting on behalf of Tommee Tippee Sippy Cups. I received a Tommee Tippee Explora Sippy Cup product as well as a promotional item as a thanks for my participation.