For two weeks only, The Lion King in Disney 3D is being released in theaters starting Friday, September 16!!

And I was honored to be able to take my family to preview it a few weeks ago.  Only my husband had seen the movie.  My daughters and I were new to the film.  Nor had I ever seen the award winning play!

I know, I am sheltered.

I have to say, I understand why it won so many awards, so much acclaim, and the hearts of so many.

Since I can only assume that most of you have seen the original, I won’t bore you with non spoiler details.  What I will say, though, is that the 3D effects made this movie even more special than the story line already secured.  I watched my girls try to reach out to the screen, jump back when animals jumped from the screen, and laugh at the antics of the characters.

The music was amazing, the art work stunning, and the heartwarming characters embedded in every viewers heart!

It is too bad that this movie is only in theaters for two weeks!

Grab the kids… the tissues… and the popcorn and make sure you experience this amazing movie in Disney 3D during this limited time run!

An unforgettable story, breathtaking animation, beloved characters and award-winning music sets the stage for “The Lion King”, a Disney classic that follows the adventures of Simba, the feisty lion cub who “just can’t wait to be king.” But his envious Uncle Scar has plans for his own ascent to the throne, and he forces Simba’s exile from the kingdom. Alone and adrift, Simba soon joins the escapades of a hilarious meerkat named Timon and his warmhearted warthog pal, Pumbaa. Adopting their carefree lifestyle of “Hakuna Matata,” Simba ignores his real responsibilities until he realizes his destiny and returns to the Pride Lands to claim his place in the “Circle of Life.”

And as a little treat for the kids, try out one of these recipes!  I can not wait to see how the kids react to them! 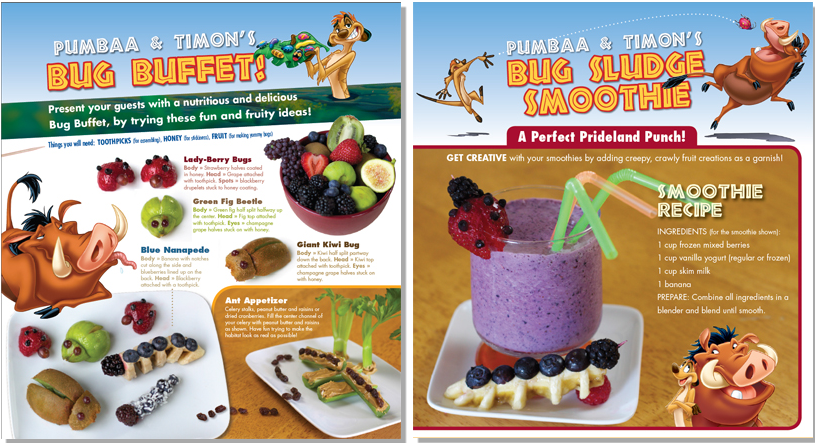 Check your local theater listings for show times in your area!