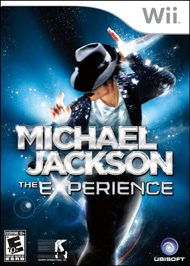 I grew up with Michael Jackson.  Watched him enthrall the world at the Emmy’s with his amazing performance of Billy Jean, and crowded around the television when HBO aired The Making of Thriller.

He is the only star’s poster I ever hung in my room as a young teen – the one with the yellow sweater vest – and the first cassette tape that I ever wore out from over play.

I clearly remember standing in front of the television, rewinding the VCR over and over again, attempting to perfect the moonwalk, the knee kick, and any other move that I could slow him down enough to try to learn.

And I would be lying if I did not admit that I always dreamed, as a young girl, that one day, I, too, would be on stage, dancing with Michael Jackson.

And now I can!

Thank you Wii and the new game Michael Jackson: The Experience!

And I am not just saying that because I am now the proud owner of THE white glove!  Well, it came with the game… but still!

I could not keep the excitement of this game all to myself so I called my friend over to help me “review” it. Between she and I and my kids, we had the best night of entertainment and exercise that we have had in a long time!

I immediately chose Billy Jean to try my hand at.   I grabbed my remote, pushed play and felt that old rush of adrenaline course through my veins like it did when I heard a Michael Jackson song come on the radio as a teen!

And I danced…  badly, by the looks of the picture, but I did not care!

The game is great!  Though you feel as if you are just dancing, this is, in fact a game!  There are levels and pop ups in the corner telling you how well you are doing with each move and even a teaser stream with hints at what move is coming up next.  That really helped me stay on track and not get lost in the game.

Plus, you can choose the level of difficulty and to have the lyrics displayed on the screen so you can sing while you dance.   Invite all of your friends because up to 4 players can dance at the same time!  Compete against your friends to see who can most match the moves of the legend himself better!

My Friend ROCKED It!

The hours of entertainment and fun are endless!

And yes, the game says it is for ages 10 and up, but I have to say, my 4 year old scored the highest score of the night!  She LOVED it and was very upset when it was time to stop playing.   “Mommy, please!  I want to play the Michael Yackson gaaammmeee!”

And when she woke the next morning, it was the very first thing she asked to do.  So we did.  And though I may never master the skill and style that Mr. Jackson had, it sure feels good to step back in time and pretend that I can!

I HIGHLY recommend this game for everyone out there!  Not only will it bring back amazing memories and fill your home with his many chart topping hit throughout the decades of his career, but it will get you up and moving, and certainly is a heck of a workout!

I know you want this game! You can go NOW and BUY Michael Jackson: The Experience from www.Amazon.com or check my Amazon.com sidebar!

I happily give this game FIVE Shining Stars!

While Ubisoft provided me with this game to review, the opinions I’ve expressed here are solely my own and represent my honest viewpoint. Ubisoft, Clever Girls Collective and I promote Blog With Integrity.