**I received this DVD for review purposes only. All opinions are my own.**

The day has come that my girls and I can finally sit down and watch the most anticipated film of the year. Maleficent is coming to Blu-Ray DVD November 4, 2014 and we were excited to already get our copy! Starring Angelina Jolie, this film captured the hearts of villain lovers everywhere and is sure to be a hit in your home too! 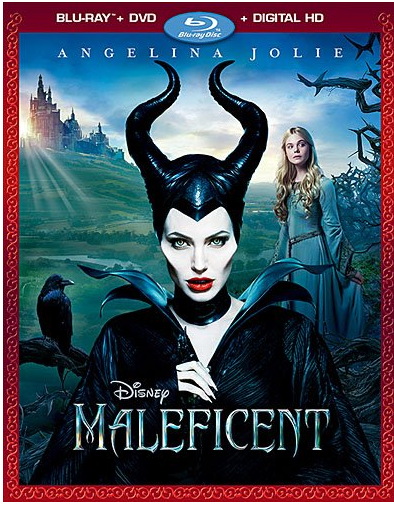 Maleficent will be coming out of hiding soon when she’s released on Blu-ray and Digital HD Nov. 4th. To celebrate, we wanted to share a bonus clip titled, “Aurora: Becoming a Beauty.” In this clip, Elle Fanning talks about playing the beautiful Princess Aurora and what the character means to her. We also wanted to share with you a fantastic Halloween costume blogger button, with details on making your very own Princess Aurora costume as well as a Maleficent scepter, wings and horn!

The girls and I decided not to go see the film in theaters in case it was too scary for my 5 year old.  But now that we have seen it at home, we know that there was nothing to be afraid of. The film is stunning in it’s imagery and score and the characters are creative and intense. Ms. Jolie plays the villainous so well you forget she is not real.

Elle Fanning is beautiful and innocent in the film and Aurora could not have been cast better.

As Maleficent battles her own evil and the growing adoration for the child she cursed, the battles grow and the human element triumphs.

Take home this amazing film November 4, 2014. In the meantime, get your kids excited about it with fun Halloween Activities!

If you preorder your copy today on Amazon, it will ship for free on the release date!

Who has seen the movie? What did you think?