Love of a Bad Day: When Your Pets Turn on Each Other

Love of a Bad Day: When Your Pets Turn on Each Other

I think everyone has bad days, horrible things that happen to them and just plain unhappy times.  Whether it be a death in the family, a divorce or just one of those days that you want to crawl back into bed and pray that you don’t have to get up again until it is all over.  Like the day that your pets turn on each other.

We are having one of those day or days now.  I am a loving parent to three wonderful dogs.  One is a deaf, blind, ornery Beagle that I have had since she was 6 weeks old.  She was my first baby, my first love and my first and last thought every day for the first 6 years of her life.  I met my husband and her attention was split.  With kids and two other dogs it has been split even more.  She’s a little drama queen now, but who wouldn’t be after all of the life changes?  She is 12 now and I see her deteriorating.  But she is well cared for and I know her life is better than most.  And I adore her…  attitude and all. 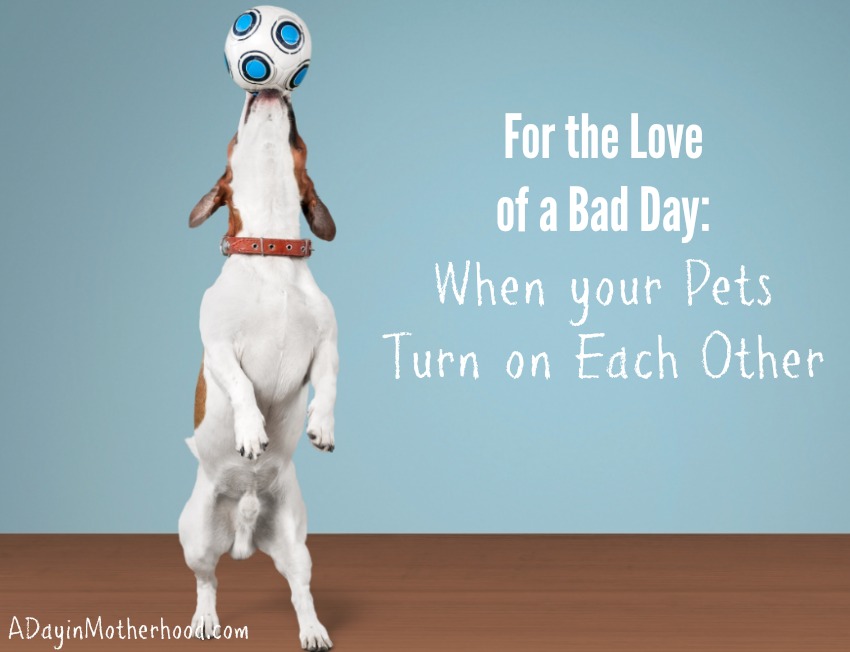 Our second is a terrier, weenie dog mix named Bud.  My ex-husband and I got him at a craw fish boil when he was barely 6 weeks old.  He has been a great dog.  A little destructive when he was a puppy, but pretty good overall.  I’ve had him about 6 years.

The third is a black lab named Lexi.  I found her outside our old house about a year ago.  Someone had left this little 7 week old by a fire hydrant and I just could not leave her there.  So, after half- heartedly attempting to find her a home, she settled into mine.

I decided a few months back to move from a small lot with all 3 dogs living in our home to an acre lot with two of the 3 spending 80% of the day outside.  With the house being vacant for 4 years, we’ve had quite the challenge of plugging all of the escape routes that the dogs have found.  We’ve purchased new fencing, wire mesh for the places there were holes dug and really attempted to stop them getting out.  When they do get out, we scour the yard, plugging where they escaped.

So far, the worse offense they have committed while out has been pooping in a neighbor’s yard.  Yesterday that changed.

I got home from grocery shopping and the dogs were in the house.  I must have been in a hurry and forgotten to let them out.  After putting the groceries away and then spending some time outside while the girls rode bikes, I let Bud and Lexi out in the back yard.  We went about our happy day, still high on the success of Katie’s birthday party on Saturday.

I saw a strange truck drive into my driveway and a man get out.  I immediately thought sales.  I opened the door, posed to say no thank you and stand my ground.

He asked if I had a lab and a little black and white dog.   Yes, they are in my back yard.  No they are not.  What?  Stupidly I call for them.  BUD.  LEXI.  Nothing.  Damn, they had gotten out.  How, I still can not really conclude, but they were defiantly out.

The next thing I think is that they are dead.  He hit them with his truck.  Oh no… how will I tell the girls?

No – it is worse.  Bud, our little spaz bucket, got into this neighbor’s chicken coop and killed 7 chickens in a matter of seconds.  Seven chickens that he got eggs for his family from.  That he worked tirelessly for 9 months raising, vaccinating, feeding, waiting for their first egg lay.  Seven chicken, dead in his yard.  For his wife, 7 year old, 5 year old and 1 year old to witness.

How do I fix this?  How can I possibly fix this?

Apologizing profusely with tears in my eyes, I fumble the phone dialing my ex-husband.  I am in shock.  This dog has never bitten or attempted to kill anything.  I am in shock.

Thankfully my neighbor came to watch the kids, cranky and confused with my tears, while I grabbed my checkbook of rubber checks and head to meet my ex-husband at this man’s house.  While my ex saw the carnage and talked to the husband, I knocked on the door to apologize to the wife.  She opened the door and I realized I knew her from the pool, thus adding salt to the wound.  When something like this happens, I want it to be a stranger.  Someone I can hope never to see again.  But, no, it had to be one of the sweetest ladies I have ever met.  Having never met her husband before this, I was truly taken aback to see her open the door.

Like all grown, mature women do, I burst into tears when I saw it was her.  I felt like an idiot but I was truly sorry that this has happened, especially to her family.  She was, per character, very sweet and we talked for a while about the incident.  Her kids had calmed down and she was, amazingly, grateful that I had come to talk to her.  She felt it a good lesson for her children that when you are responsible for a wrong, you tuck your tail and try to make it right instead of running from it.  This just made me feel 1 inch tall.  What an amazing woman.

By the time we were all square and had written a check we can’t afford for them to cash, a decision had to be made about my beloved Bud.  My first instinct was that I would have to put him down.  After calmer heads prevailed, we decided that a no- kill shelter would be best.  Even though we would like to keep him, and it is just chickens, he is a liability now.  Despite our best efforts, hundreds of dollars spent on the fence to keep him in and weighing every suggestion that has come in, we just feel like there is no other choice.  If he were to get out again and kill more livestock, or a cat or, heaven forbid, bite a child, we would already have on record that he killed the chickens and we would lose everything.

We can’t take that chance.

I spent the rest of the evening in tears, trying to hide them from the girls who obviously sensed something and were on their best behavior.  I’d actually kind of forgotten about them in all of this.  Relying, unfairly,  on my neighbor to help and then the TV to occupy them.

But as I am doing the dishes, Bud sleeping at my feet like he always does, tears streaming down my face at the loss of money, respect, and my puppy, I feel a tug on my shirt.  I turn around and it is Katie and Sarah.

I love you Mommy.

Sarah hugs my legs and Katie kisses my hip and they skip back to the living room to see what Scooby has done now.

How did they know?

The tears flow down my face as I thank the dear Lord above for my children.

Because he gave me them.  And they gave me love on a bad day.