Are  you ready for an all new adventure? The Legend of Hercules opens in theaters January 10th, and we are on the edge of our seats here at A Day in Motherhood! We are so excited to be participating in this super cool giveaway for an exclusive Kellan Lutz autographed poster!  The weather that has been keeping us inside all week cannot keep us from hitting the cinema this weekend! With a bit of cabin fever, we are certainly excited to see The Legend of Hercules! 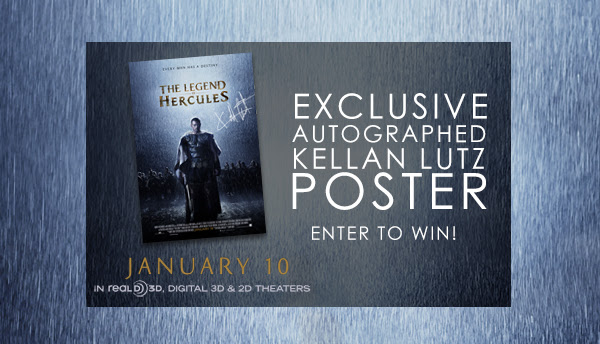 In the epic origin story THE LEGEND OF HERCULES, Kellan Lutz stars as the mythical Greek hero — the son of Zeus, a half-god, half-man blessed with extraordinary strength. Betrayed by his stepfather, the King, and exiled and sold into slavery because of a forbidden love, Hercules must use his formidable powers to fight his way back to his rightful kingdom. Through harrowing battles and gladiator-arena death matches, Hercules embarks on a legendary odyssey to overthrow the King and restore peace to the land.

• THE LEGEND OF HERCULES: Interactive Movie Poster – Move & click your mouse across the GIFs to control the scene and transport yourself right into the film.
Official Trailer for The Legend of Hercules

For your chance to win the Kellan Lutz autographed poster, be sure to enter below and GOOD LUCK!  Each household is only eligible to win ONE Autographed Poster via blog reviews and giveaways. Only one entrant per mailing address per giveaway. If you have won the same prize on another blog, you will not be eligible to win it again. Winner is subject to eligibility verification. U.S. and 18+ are eligible to win.

Congratulations to our winner: Thomas T.!!

STAY CONNECTED TO THE LEGEND OF HERCULES