Jeremy Fink and the Meaning of Life DVD Review

Jeremy Fink and the Meaning of Life DVD Review 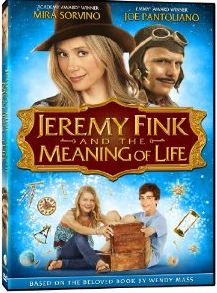 There is a wonderful movie coming out on DVD, on demand and in digital release March 6, 2012 that is based on a fantastic book by Wendy Mass. Academy Award Winner Mira Sorvino and Emmy Award Winning Joe Pantoliano star in Jeremy Fink and The Meaning of Life

. This is a clever movie about a 12 year old boy one month shy of his 13th birthday who received a box with four locks.  But no keys.

“The Meaning of Life to be opened by Jeremy Fink on his thirteenth Birthday.”, reads the box.

As Jeremy Fink and his best friend, Lizzy, set out on an adventure through Manhattan, from flea markets to science museums, looking for the clues that lead to the keys, he encounters odd characters, new clues to the locations of the keys and, in the end, the biggest secret of them all!

Being a 39 year old mom of three little girls, I have to say, I actually really enjoyed this movie!  It could be that I like to think I am young at heart or, more likely, I kept thinking it reminded me of my own preteen movies that I use to love.  The ones that were just a lot of fun!  Good, clean fun, and with a lesson tucked into the fold.  The campy, fast moving, witty banter of the young characters is refreshing!  And I love that the message behind the movie is clear and easy for a preteen, tween or other viewer to understand. 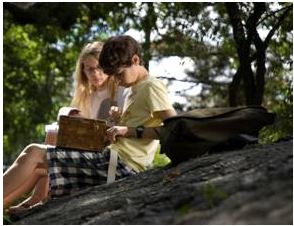 I don’t want to give too much away in a review but I will say that any young kid, girl or boy, would really enjoy this film and gain a great message from it!  The animation that represents Jeremy’s inner world is clever and does not take away from the message in the movie.  Plus it’s just plain awesome to see two kids running through New York City, using their imaginations and meeting up with all kinds of characters and exploring what life is all about!  And let me tell you, some of them are quite hysterical!

Phase4Films.com is releasing the film and they provided me with pieces of an interview with the Writer and Director of this film, Tamar Halpen.  Below are some of the questions and answers I found to be most interesting!

Why did you decide to make this film?
HALPERN: When I read Jeremy Fink and the Meaning of Life, I was deeply moved by the message, namely that each day is precious and it’s up to us to celebrate that gift. I love how beautifully and simply Wendy Mass (the author) illustrated the power we have to choose to be joyful, even in the face of great loss.  To understand and appreciate how much love we have around us and the great possibilities each day holds, regardless of challenges and sorrow, is to understand the meaning of life!  Through their adventures, Jeremy and Lizzy show us and remind us to have gratitude, and I knew it would be my great honor to bring that spirit to the screen. 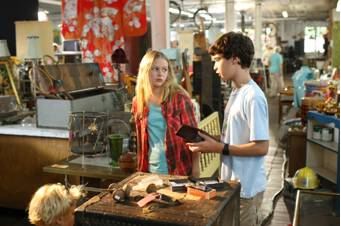 Which is your favorite scene?

HALPERN: On a dramatic level, the Coney Island scene where Jeremy apologizes to Lizzy for not understanding how hard it was for her when her mother left.  That is the moment when all storylines come together – we see Jeremy will overcome his pain and be an adult and we see that Jeremy and Lizzy will continue having a friendship as they grow up.  The acting is so sweet and honest and the music brings it all home when they hug. I knew when I wrote it that it would be the most important scene and the way it came out has made it one of my favorites.

I also love the scene between Jeremy and his mother (Mira Sorvino) when he tells her he needs her to treat him more like an adult, but he uses her trick of citing a favorite children’s book to make his point.  I read The Giving Tree to my own son hundreds of times, so using it in this scene meant a lot to me.  Mira and Max play it beautifully and it continues to build on the theme that Jeremy will grow up to be a well-rounded, good human being, just as his dad wanted – as we all want for our children.

Why do you think kids will like this film?

HALPERN: Since the book has such a huge following (half a million copies sold on Amazon alone), there’s no doubt the film will have a following.  For kids who haven’t read the book, I think they’ll be drawn in by the sweet, honest tone of the film, the comedic relationship between Jeremy and Lizzy, and the stop motion animation that represents Jeremy’s inner world.  Some kids’ movies try to talk over kids’ heads and be snarky, or make adult-themed jokes.  I wrote the script to be honest, like the book, but with a level of comedy that’s entertaining to kids and adults. Ultimately, we are rooting for Jeremy to grow up so he and Lizzy can stay friends, just like we hope to keep our childhood friends even though we all change. This film speaks to that very relevant topic for kids, along with the larger themes of grief and joy.  I think the film is a really fun ride that has an incredible amount of heart, just like the book.

Jeremy Fink and the Meaning of Life (the novel) sold half a million copies on Amazon and there is a reason why.  The lesson of learning to be happy, even when you have a great loss, plus the ever challenging job of growing up is creatively and smartly done.  I have given this movie to my neighbor and her 12 year old son and I can’t wait to hear their thoughts on it too.  And then it will go in my collection of great movies I want my girls to see when they get older!

Preorder your copy now for only $9.99 on Jeremy Fink & The Meaning of Life

**I received the  product discussed in exchange for my review.  ADayinMotherhood.com is the writer and distributor of this review.  100% of the opinions and writings are ADayinMotherhood.com’s and can not be duplicated without prior permission.  Images and links were used with permission from the marketing company.**