If you have seen this blog at all over the last month you know that Christmas movies play a big roll in our lives!  So any time I get some that we like, I enjoy sharing them with you!  And I like it when I find some that are not as well known and find out that they are a ton of fun! 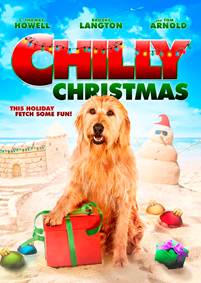 Chilly Christmas , produced by Steven Paul, follows 11-year-old Bobby Cole, his detective dad (C. Thomas Howell, E.T., The Extra Terrestrial, The Outsiders), and their lovable-but-destructive pooch, Chilly, who live together in Sunshine Beach, California.  When Bobby’s father is offered a job promotion in New York City, Bobby is thrilled for him – but his excitement quickly turns to heartbreak when he realizes he may have to say goodbye to Chilly, who is too rambunctious to live in a tiny city apartment!  Desperate not to leave Chilly behind, Bobby and his friends try to acclimate him to city living (including using the toilet and a treadmill!).  But, while the Coles prepare Chilly for the Big Apple, trouble begins brewing in their own backyard when a dog-napper (Tom Arnold, True Lies,“Roseanne,” A Christmas Wedding Tail) and his crew suddenly show up in Sunshine Beach, hot on Chilly’s tail!  It’s up to Detective Cole, Bobby and Chilly to stop the thieves in their tracks and keep their family together for the holiday season – and for good! 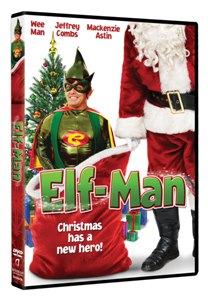 The non-stop action begins on Christmas Eve at the Harper house, where Ryan and Kasey Harper’s dad, Eric (Mackenzie Astin) is hard at work on his newest invention.  The Harpers are all set to have a merry Christmas – until Eric is kidnapped by a gang of thieves, who seek to steal his newest creation.  When Santa arrives that night to find the Harpers in trouble, he fulfills the wish that Kasey makes on a magical elf doll by leaving behind one of his elves (“Wee Man”) to help save her dad.  As the robbers scheme to break into the house, the Harpers help their new friend discover his true powers as superhero “Elf-Man”!  With time running out and the Harpers counting on him, Elf-Man takes on the kidnappers in a heroic attempt to save the family’s Christmas.

The Dog Who Saved Christmas 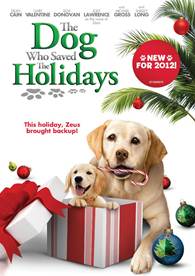 The fur-flying fun begins when the Bannister family, George (Gary Valentine, “King of Queens”), Belinda (Elisa Donovan, Clueless, “Sabrina, the Teenage Witch”) and their kids, Kara (Caitlin Carmichael, “iCarly,” “Dexter”) and Ben (Wyatt Griswold), jet off with their dog Zeus (voiced by Joey Lawrence, ABC Family’s “Melissa & Joey”) to celebrate the holidays at Aunt Barbara’s (Shelley Long, “Cheers”) stunning Malibu mansion.  Aunt Barbara surprises them with a new puppy named Eve (voiced by Peyton List, Diary of a Wimpy Kid, Something Borrowed) and the whole family is smitten except Zeus, who quickly learns the new pooch is not as innocent as she seems.  Zeus decides to run away, but when he spots two familiar thieves, Ted (Dean Cain, “Lois & Clark” and The Dog Who Saved Christmas) and Stewey (Joey “CoCo” Diaz, The Longest Yard), breaking into the house, he knows it’s up to him and Eve to beat the bumbling burglars and save Christmas once and for all!

We had so much fun with these movies and are so glad to have them in our collection!  Pick them up at your favorite retailer and plan a Christmas movie night with your family!

And because Anchor Bay Entertainment wants everyone to have this movies, (1) of my readers will win the entire pack!  Just enter below and GOOD LUCK!

**I received these DVD’s for review purposes only.  Please see my Disclosure Statement for more information.**