This is a sponsored post written by me on behalf of PAM Cooking Spray.

The Holidays are changing for my girls and I as we settle into the reality of a divorce. I don’t have my girls every holiday now and though that can sometimes make me very sad, it also gives me the motivation to make the ones I do have with them even more spectacular. So when I find a product that can help me make something wonderful and delicious for my girls, I am all over trying to make it something they will look back on and love one day! PAM Cooking Spray has always been a mainstay for my baking and cooking. Now they have improved their formula and they now leave 99% less residue and build up on baking dishes and pots and pans. So I thought I would try it on my Easy Apple and Pear Crisp Recipe and see if it helped save my brand new Le Creuset Pie Dish.

I have made Apple and Pear Crisp for years now with my original recipe coming from Ina Garten and the Food Network. But with three kids and a full time blog to run, I needed a simpler recipe that I could throw together in a no time but still have the same awesome taste of. So I used the Apple and Cranberry recipe on the PAM website and modified it to what the kids and I like. 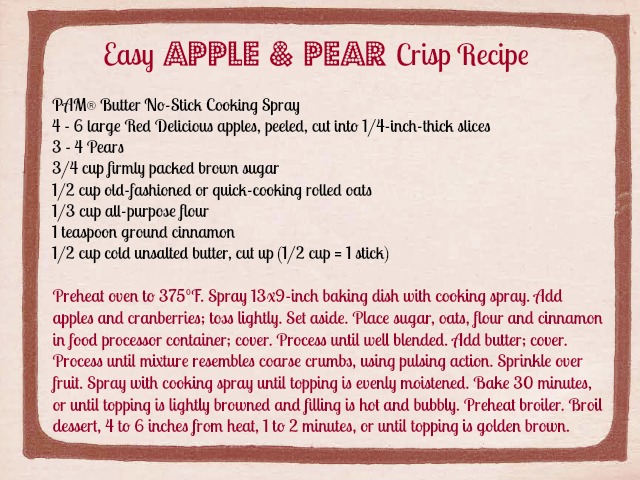 I made some modifications as I went too. I don’t have a food processor, nor did I want to wash one when I was done, so I mixed the ingredients in a bowl. I did not think it made much of a difference at all, to be honest. In addition, a little trick I used was to use the PAM Cooking Spray to moisten the mixture prior to pouring it in my dish and I think that made it even more moist and delicious.

When the crisp was cooked, I topped it with Vanilla Ice Cream and Candies Pomegranate and Walnuts that I found at the store to give it some extra crunch. It is delicious!! 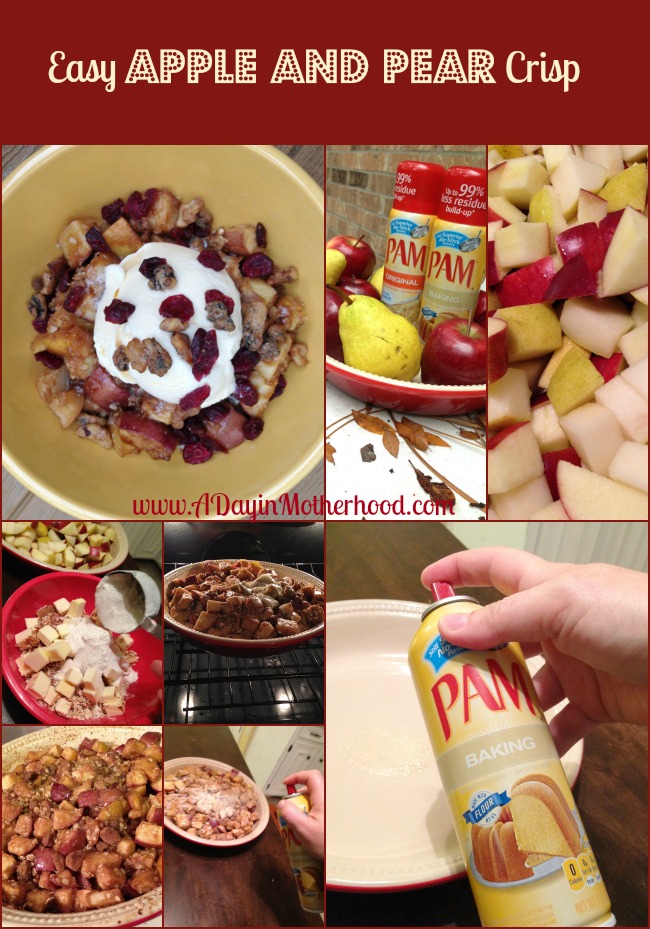 But the best part is that a dish that usually has bits a pieces that stick to the dish, and a residue that lingers no matter how I scrub, came out to serve easily and cleaned up to like new. I really think this new formula is going to save my dishes this holiday season by not only providing great flavor, but also helping me keep my dishes like new! 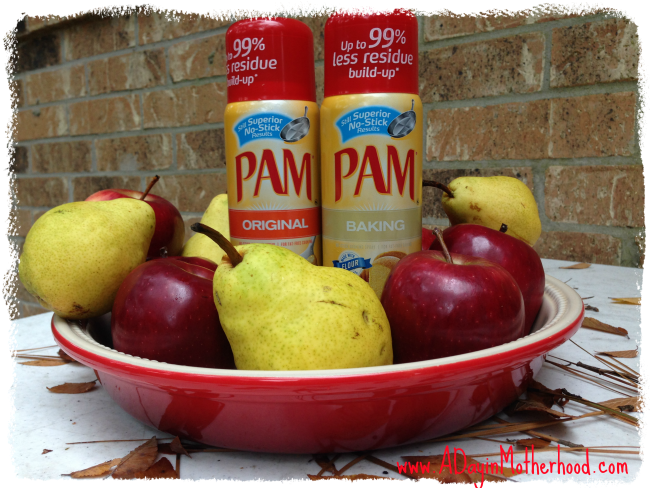 Start all of your baking off right with the newly improves PAM Cooking Spray that leaves 99% less residue on your favorite dishes. Plus, with ZERO calories, it is a great way to flavor a dish with no added ounces to your waist.

Want to see how it works for you? Pick it up at your local retailer!

And, as an added bonus, (1) of my readers will WIN a Full size sample of PAM AND a Le Creuset Pie Dish. You will love this dish. It is beautiful and the highest quality!

Just ANSWER the QUESTION in a COMMENT BELOW and leave a way to contact you and you are Entered to WIN!

What is your favorite dish to make that PAM Cooking Spray’s New formula could help you make better?

Congratulations to our winner: Tom L.!!

By participating in a Sweepstakes on ADayinMotherhood.com (“Blog”), each entrant unconditionally accepts and agrees to comply with and abide by these Official Rules and the decisions of Massive Sway (“Sponsor”), which shall be final and binding in all respects. Sponsor is responsible for the collection, submission or processing of Entries and the overall administration of the giveaway. Entrants should look solely to Sponsor with any questions, comments or problems related to the Sweepstakes. Promotion begins at the time the blog post announcing the Sweepstakes is published on the Blog and ends midnight PST on   December 2, 2013.

Open to legal residents of the U.S. who are physically located in the U.S. or the District of Columbia who are not a minor (as defined by state of primary residence) usually a minimum of 18 yrs. old. Sponsor and parents, affiliates, sales representatives, advertising and promotion agencies, clients and each of their respective members, officers, directors, employees and contractors (including participating bloggers) (collectively, the “Promotion Entities”), and members of their immediate families and/or persons living in the same household as such persons, are ineligible to enter the Sweepstakes or win a prize. Void in all jurisdictions other than the U.S.

The winners of the Sweepstakes will be selected in a random drawing by Blog from among all eligible Entries received throughout the Promotion Period using the selection tool indicated on ADayinMotherhood.com. The random drawing will be conducted by Sponsor or its designated representatives, whose decisions are final. Odds of winning will vary depending on the number of eligible Entries received. Winner will be notified by email at the email address provided in the Entry Information after the random drawing. Potential winner must accept a prize by email as directed by Sponsor within 48 hours of notification. Any winner notification not responded to or returned as undeliverable may result in prize forfeiture. No substitution or transfer of a prize is permitted except by Sponsor.

The prize for this Sweepstakes is a kit with an approximate retail value (“ARV”) of $50, including:

Only one prize per person and per household will be awarded. Prizes cannot be transferred, redeemed for cash or substituted by winner. Sponsor reserves the right in its sole and absolute discretion to award a substitute prize of equal or greater value if a prize described in these Official Rules is unavailable or cannot be awarded, in whole or in part, for any reason. The ARV of the prize represents Sponsor’s good faith determination. That determination is final and binding and cannot be appealed. If the actual value of the prize turns out to be less than the stated ARV, the difference will not be awarded in cash. Sponsor makes no representation or warranty concerning the appearance, safety or performance of any prize awarded. Restrictions, conditions, and limitations may apply. Sponsor will not replace any lost or stolen prize items. Prize will only be awarded and/or delivered to addresses within the US Only. All federal, state and/or local taxes, fees, and surcharges are the sole responsibility of the prizewinner. Failure to comply with the Official Rules will result in forfeiture of the prize.

All entrants acknowledge that if they are chosen as a winner, certain of their personally identifying information may be disclosed to third parties at least as required by law, including, without limitation, names and mailing addresses on a winner’s list. All personal information submitted as part of the Sweepstakes may be shared by and between the Promotion Entities, and each of the Promotion Entities will use such information in accordance with their respective independent online privacy policies.

Sponsor is not responsible for any incorrect or inaccurate information, whether caused by website users or by any of the equipment or programming associated with or utilized in the Sweepstakes or by any technical or human error, which may occur in the processing of submissions in the Sweepstakes. Sponsor assumes no responsibility for any misdirected or lost mail, or any error, omission, interruption, deletion, defect, delay of operation or transmission, communications line failure, theft or destruction or unauthorized access to, or alteration of, Entries. Sponsor is not responsible for any problems or technical malfunction of any telephone network or lines, computer online systems, servers or providers, computer equipment, software, failure of email or players on account of technical problems or traffic congestion on the Internet or at any website or combination thereof, including injury or damage to entrant’s or any other person’s computer related to or resulting from participating in the Sweepstakes. If, for any reason, the Sweepstakes is not capable of running as planned, including infection by computer virus bugs, tampering, unauthorized intervention, fraud, technical failures, or any other causes beyond the control of Sponsor which corrupt or affect the administration, security, fairness, integrity or proper conduct of the Sweepstakes, then Sponsor reserves the right in its sole discretion to cancel, terminate, modify or suspend the Sweepstakes. In such event, Sponsor may, in its sole discretion, perform the random drawing from among all eligible Entries received prior to or after such cancellation, suspension, or modification.

This is a sponsored post written by me on behalf of PAM Cooking Spray.  For more information, visit http://www.pamcookingspray.com.