A Monster In Paris on Blu-Ray Combo Pack Review

A Monster In Paris on Blu-Ray Combo Pack Review

What do kids love more than candy and driving their parents insane?  MOVIES!  So when I was asked to review a movie, I said “heck yeah!”.

When I was asked to review A Monster In Paris I was a little afraid of whether or not my kids (Joe- age 6 and Lorelai- age 5) would like it- they’re not quite fond of scary stuff yet.  Then the movie arrived and we gathered on the couch in the living room and opened it.  The reaction? Joe- “Cool!  Can we watch it NOW?!”   Lorelai- “Please mom, can you make popcorn too?”  Me- “Let’s save it and watch it tonight after dinner”.  And so we broke out the sleeping bags and the pillows and did just that. 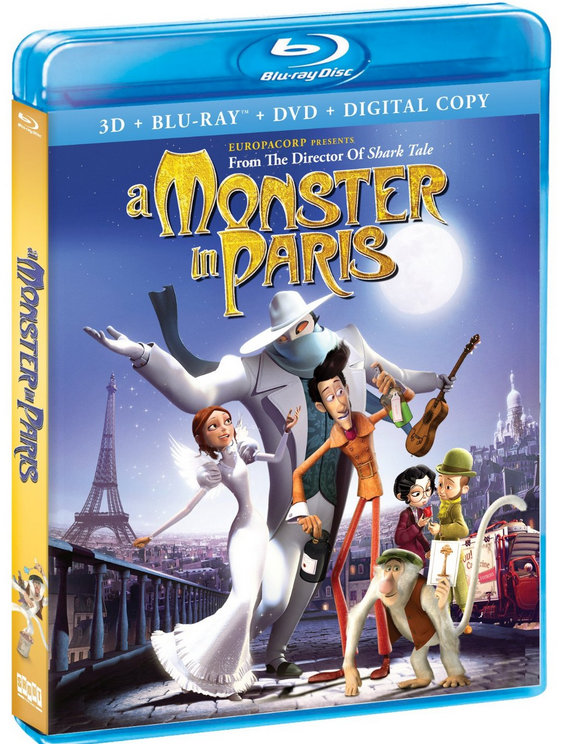 I do have to admit- the beginning had all of us a little leary about what the next hour and a half was going to bring…..but it wasn’t long until we knew this would be one of those movies that you just can’t stop watching!  It has it all….love, monsters and music!  What more could a kid ask for in a movie?!

What exactly is A Monster In Paris about?

“A wacky inventor, his camera-crazy best friend and a madcap monkey make a massive mistake when let loose in a mad scientist’s laboratory. With lotions and potions spilling everywhere, the troublesome trio accidentally creates Franc, the product of a reaction between a common flea and one of the scientist’s mystery concoctions. What they fail to realize, however, is that this ‘monster’ is actually a soft-centered soul with an astounding talent for music.

With the help of an enchanting nightclub singer Lucille, Franc becomes the talk of the town, just as stories of Paris’s newest monster attract the attention of the egotistical police commissioner, hell bent on securing a big prize to help his battle to become mayor. The unwitting scientists and the singer must team up to protect Franc, a monster with more than a musical career to protect!”

**I was provided the featured product for review purposes only.  Please see A Day in Motherhood’s Disclosure Statement for more information**